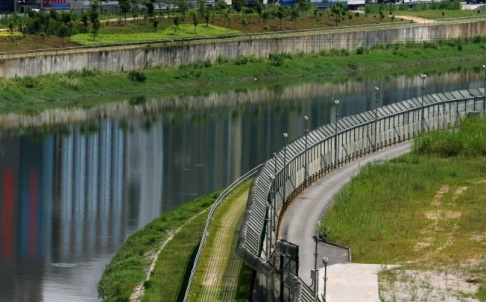 Scores of Shenzhen households have been complaining about very intense light coming from the Hong Kong side of the Shenzhen River for weeks, a report published in the Guangzhou-based Southern Metropolis Daily said on Thursday. High-intensity lights, which were added last month to bolster security along a stretch of the Hong Kong-Shenzhen border, have reportedly been affecting “thousands of households” in a densely populated residential area of the mainland city, the newspaper claimed.

“I came home one night and it was so brightly lit I actually thought the place was on fire,” the Daily quoted a Shenzhen resident, surnamed Tang, as saying.

Tang, who lives in Futian district’s Guanghuayuan, said he was unable to sleep at night because such strong light shone through his curtains. He added that could not even watch television due to the glare.

Hundreds of residents in Ludancun, one of Shenzehn’s oldest residential neighbourhoods, have also complained to both Shenzhen and Hong Kong police about a “dazzling light problem”. The community is close to the Lo Wu Control Point.

According to the report, some residents said they would appeal to the Hong Kong government if the problem was not fixed.

A spokesman for the Immigration Department said they had not heard any complaints about lighting in public areas of Lo Wu Control Point, which they explained was not under their management.

Lo Wu Division police said the lights were automated to go on each night. They would not comment on specific cases on Thursday.

Nine years ago, residents of Sheung Shui addressed similar complaints about “laser lights” on the top of the Shenzhen’s Diwang Building. The laser lights were subsequently removed.