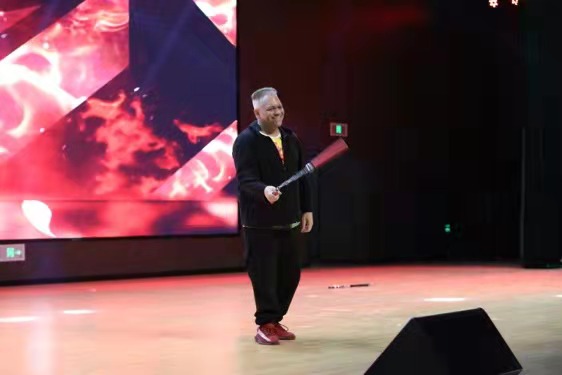 (Changsha, Hunan – 27 November 2021) – As I sat to enjoy a show for the teachers at Cranleigh, I noticed how this past 7 p.m. on Thursday 25th November this special event was about to take place. Teachers Yao (dark suit and tie) & Vickie (black cocktail dress and high heels) came out gorgeously to expose, announce and for all to enjoy this festive night as presenters to this impromptu-gala event.

This program taking place started with Chris Love, as he sang Elton John’s “Your Song”. It was passionate until he missed a key on the piano and decided to start over. Then came the enthralling passion from a talented young teacher who could easily ‘wing it’ and still come out on top with something melodic and beautiful. It’s a heartfelt song from the 1970s that takes people back to the days of youth; especially for those who grew-up in Western countries and understand the true meaning of this song, which is one for love. Christopher towards the end finished comedically, as he exited the stage with a little dance for the continuation of this music festival.

Then, the music continued down the list with rhythms from China, as artists/teachers arose to passionately find themselves at centerstage.

After came the sweet style of Tang Mengjiao’s “Question”, which was another rendition to love, what direction to take, feeling and honor. He embarked with coolness onto the stage with his dark outfit, hat, and super swag.

Later came Yu Zhigang’s “I love you China”. The excitement was buzzing in the air, as he nearly brought with the emotion for his country the house down. There were applauses, screams of exuberance, as the audience cheered and applauded over and over to the way he felt and manifested with the song. Another teacher came running with flowers, this happened several times during the distinctive performances and throughout the night.

When it was Nick’s turn to the tune, “You are my eyes”, nonetheless in Chinese, he really rocked it! The most difficult part was to remain composed as the children ran up to him with neon glitters and he was also served with gorgeous flowers. He kept it together and it was a great performance in a second language. Sweet indeed!

Ziheng Li took Alvaro Soler’s “El mismo sol” (The same sun) to another level and sung it with all his might. Keeping his cool with honor and gusto since he rolled superbly with the Spanish ‘Rs’. The hardest part for speaking Spanish as their second or even third language is to roll with those hard ‘Rs’ and he honestly did it to the best of his ability, for that, kudos my man!

My partner (Evelyn) from the grade 4 did a hip-hop jazzy dance with one of our students, Even and she was one of the show stealers! Unique, expressive, and made me proud to have her as a partner/co-teacher inside the classroom. Nice! Moved the crowd the get-up, dance and students ran to the stage to give her neon glows and flowers. Really cool.

I came number 14th down the line, dreading the moment. Wondering if my legs and nerves would work or give out from under me after the injuries 14 years before. What a symbolism, 14th position for 14 years of waiting! I walked onto the stage, then began my movements with the Carl Douglass hit, “Everybody was Kung-Fu Fighting!” Another old song that I once performed Kung-Fu too when I was a boy. You see, I used to study martial arts, but now I was a little rusty. But tonight, it seemed like the energy flowed superbly and I didn’t struggle with my legs at all. I felt the power, with my cane and nun-chucks performed something which took me back to my prime 30-years before and did it against an eight-point attack. Jennifer Zhou (1st and 2nd grade teacher) was gracious enough to come-up on stage and do the Kung-fu demonstrations with me. Just lovely! My favorite was when my students from Grades 2 and 4 gave me a standing ovation! I was literally floating on air and emotional.

After me, there was “The Longest Movie” by Peng Hao. A lovely ballad made by a gorgeous lady who really knew how to excel in her voice. It was done neatly and nicely, the cherry-on-top to a beautiful night!

When I thought it was almost over, came one of the best parts of the night, and a little treat… It came in a lovely song and performance called, “Black Mamba”. The beauty of it all, other than the song, was the ballet. The ballet style one misses back home, a gracious figure comes out like a swan to conquer hearts and the night!

By the time it was over, I got the best part, a recognition for all our hard work and this ‘old man’ got a 93-percent. Not bad, Kung-fu came around sixth place out of 14, can’t complain. I was proud, but I was even prouder of my partner, Evelyn. She made us and Grade 4 proud! One for the team, well done partner.

For the closure, Alex Shen began singing with wonderful ‘pipes’ (lungs) a song and I didn’t realize he was such a great-karaoke master. That was our thanksgiving and “Teacher-Talent Show” night. It was a night to remember, it was one I will certainly not forget, and it took me back in time to my youth!