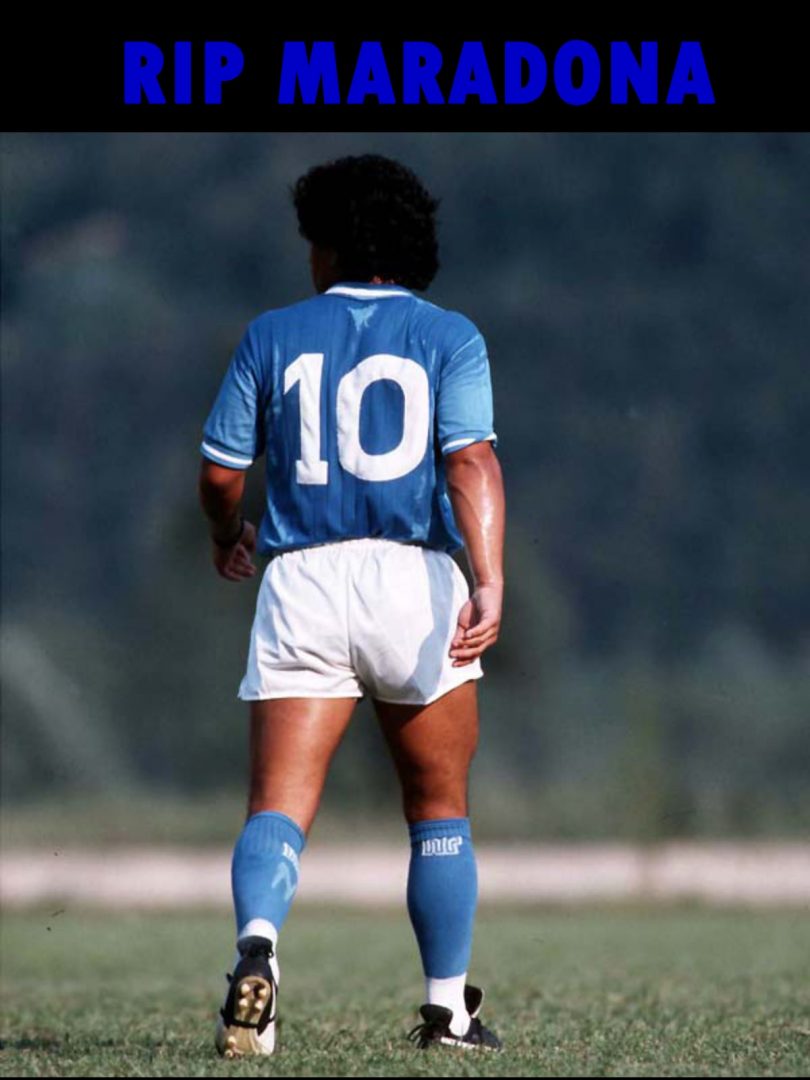 Diego Maradona, gifted by the gods

Diego Maradona was born in Villa Fiorito, Argentina (1960), just outside of Buenos Aires. Growing-up in Argentina, by the 1970s he became one of the best players for “Cebollitas” (The Little Onions). His life would change dramatically during that period, and everything would skyrocket for him into international stardom by 1976. Playing for Argentina’s Premier League, his life changed from rags to riches. Basically, he was a poor boy who made good and with fame came also the ‘vultures’, those too envious to accept his hard work, sacrifices and all the trappings of success. Maradona wasn’t a Saint, as sometimes he is portrayed back in Argentina. But he reached a height that only three other people have been able to achieve: Carlos Gardel, Evita Peron, and Pope Francis. He came from a land of great wines, cattle, food, tango, gorgeous people, and a country that has so many similarities with Italy. After all, a fourth of the Argentinean population is Italian or comes from Italian ancestry. The same thing is true with Maradona, whose people came from Naples (on his maternal side) before arriving in Argentina.

Diego grew-up during a turbulent time in Argentina, when the dictatorship or Junta took control of the country and started a “Dirty War” on its people between 1976 to 1983. These years would convulse the country for decades to come. Thirty-thousand people disappeared in the process, especially those who were suspected of communist ties, students, leftist and intellectuals faced persecution, torture, and death. Thousands had to go into hiding and babies were kidnapped from dead parents and given to childless couples of the military elite. The “Dirty War” came to an end after the Falklands War (April – June 1982), when the cracks in a corrupt, bankrupt, and inefficient government system started to show. It signaled a change in politics by 1983 and after, for the remainder of that decade Argentina went back to a democratic-free state. For Maradona, (I think) it was a period of great confusion, between his patriotism for his country and what would later happen to thousands of exiled Argentineans who suffered because of the dictatorship. These same Argentineans would end-up in Spain where he was playing for the Spanish League (Barcelona).

He was a controversial man who lived in the moment, with the zest of life and passion. Known to be a flagrant male chauvinist and womanizer. But one thing shouldn’t be confused with the other during his time in Spain, where he played two consecutive years for the FCB (Futbol Club Barcelona) team.

Towards the end of the 1980s, Maradona was transferred to the Neapolitan Italian League (Napoli), where he would remain for the next seven years. Sadly, for the great footballer, it was to become his best and worse years. It was where he would hit his peak as one of the greatest of all time. It’d be a period when he suffered most from his injuries on the football field, and he started dabbling into cocaine. His addiction to the drug stayed with him until the end of this life. By the time he ended with the Napoli football team, it was for Maradona the beginning of the end in a 20-year career of highs and lows.

In 1991, he tested positive for cocaine and was banned from the League for 15 months. Coming back in 1992 for Sevilla F.C. (Futbol Club), and later in ’93 with Newell’s Old Boys and finishing where he started (1995) with Boca Juniors. It was when it fueled his addiction even worse, he started to gain massive weight and battle with obesity. At this point, when he couldn’t play anymore, he went into coaching and still, that held its share of controversy.

The ongoing feud with another football great, Pele lasted until his death. What began as shared admiration between two greats, turned into a bitter feud and rivalry of sorts. These gentlemen taking cheap shots at each other. There was a point Maradona wouldn’t share the stage with Pele when it came to be recognized as two of the greatest footballers of the 20th Century. Pele was a great footballer, better than Maradona in every way (in my opinion). Pele was great on the field, personal life aside; however, he never allowed his fame to destroy him. Different with Diego, who allowed fame to go to his head and destroy him on and off the field.

When he reached his 40s, Maradona started dealing with health issues that would nearly kill him until his death by heart attack in 2020. These were problems dealing with his addiction to cocaine and bad eating habits towards the last two-decades of his life. A tragedy of uncontrolled fame at such a young age. Can I judge him? Not, if I was propelled into stardom at such a young age and coming from poverty and not having a good hand to guide me, the same would have happened in my own life!

Diego Maradona will be one of the greatest football stars of the last century, second best to Pele. One thing is important to comprehend, Diego’s life is a cautionary tale on the excesses of fame and fortune which came too early and quickly! But his memory in history will hold true for centuries to come.

Recently, I watched the T.V. series “Maradona” and saw a grandiose-human being. The same person who had to work hard and train to reach greatness. He also had his faults, those which came with stardom. It taught me a lot. It was a clear understanding and lesson to what happens when people aren’t guided properly. That is why, we need better international laws to protect these athletes and their talents from the people who exploit them.