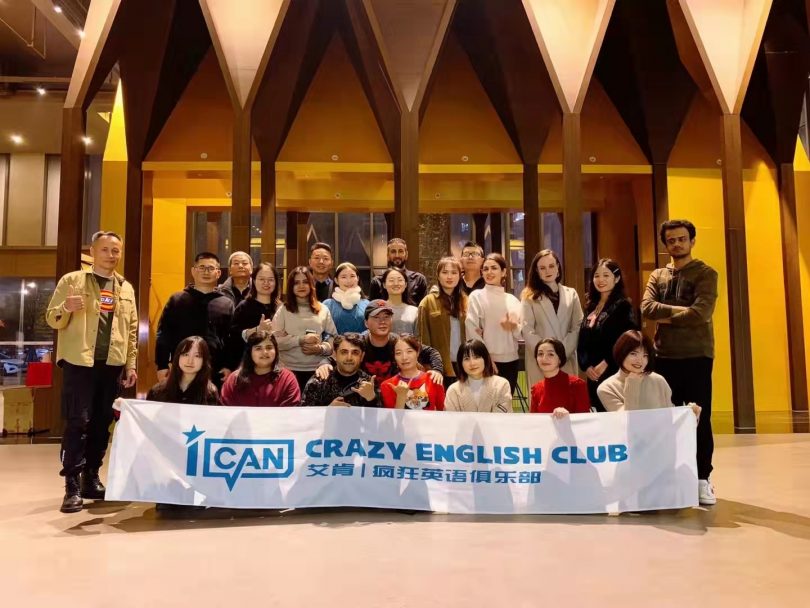 Beauty from Arrabalde, Spain came to China with a wealth of culture

Just four months ago, Cris came into our lives here in Changsha, Hunan Province. She dove in with a passion for the group and English speaking, “I Can Salon” here in the city. This group celebrates their meetings every Wednesday and Saturday evening (at the Yuelu District) to expose none-native speakers into the English-speaking world. However, it was Cris with her charms who got the full attention of the group. She spoke in a gorgeous, but sexy Spanglish that people like Penelope Cruz or Salma Hayek would be easily proud of. But this wasn’t the only reason she was coming here from her native Arrabalde, Spain. She was one [of the few] teaching the popularized Spanish language (Castilian styled) here in China. This language which in the last 12 years has become one in vogue.

We call her delicately, Cris, but her full name is Cristina Villar Gonzalez and she wanted me to know more about Spain. Yes, I come from Spanish ancestry, but don’t know enough to understand the intricacies of the Spanish culture; since I am a native New Yorker who grew-up too Americanized to comprehend fully about his ancestral culture. Except for the occasional paella that mom made on a Saturday or later in my life, downing an “Estrella Beer” from the Province of Galicia; place in which my people originated from. I understood little about Spain.

No, for Cris, this lovely Spanish national who wanted to expose what was her native Arrabalde all about and why she was here in China. For the most part, Cris came from a small town located in the Province of Zamora and part of the autonomous community of Castilla and Leon. From humble origins, she honed her skills to fit perfectly into the international setting. Afterall, Spanish is the language she teaches, and her mother tongue is spoken in 23 other countries across the globe. Furthermore, Spanish is the fourth most spoken language worldwide. But Cris wanted me to understand the following, there are no shortcuts in this life. When it came to Arrabalde, she was proud but fair and realized it was and is a small town of only 294 people. She gave sometimes a small giggle or sweet laughter when describing what she loved, her native Spain. Overall, she mentions [that] where she comes from is an ancient place, here in her hometown was discovered a golden treasure and a Celtic fort years before. Cris mentions that today it is part of the patrimony of Spain and where she belongs.

Cris is an educated young lady with a Masters’ Degree for Teaching the Spanish Language (University of Leon). After finishing up here her Master’s, she realized that although she loves Spain very much, her chances were slim with job opportunities and instead of becoming one in the longline of unemployed in Spain, she packed her bags and wanted to give China a chance. What began as a one-year experience to further develop her skills back in Shenyang at the University of Liaoning, turned into an eight-year stint which she has fully enjoyed and loves. She later transferred to Chongqing to gain further knowledge of China and literally did a cross country. Now, we are thankful to have her here in Hunan Province, part of the “I Can Salon” activities and Changsha’s glorious nightlife.

I asked her, “Why is Spain so great and what is the attraction?”

She gives a gentle laughter and answers, “We are an ancient culture which goes back to the Greek and Roman Empires. The positives of my culture are the Mediterranean diet, which is part of Southern Europe and extremely healthy. We don’t only enjoy our paellas, but our share of fish and great wines. People for the most part are friendly. We have great monuments to history, whether a person goes to the south, they’ll bump into what was left behind by the Caliphate (Arab Empire) in the 15th Century and if the visitor goes far-up north, they will be able to see gothic and Visigoth ruins. Spain along its coastline is ‘sunny beaches’. To visit it is great, when we get into the social issues, there is the problem. To live is much tougher for the young, since there is a big unemployment problem.”

I continued, “Cristina, what do you want people to know from the Spanish/Spain’s culture?”

Her voice lights-up to say, “I want to give a better standing/promotion of our Spanish culture. That is to say—we are not all lazy or late. We are hardworking and on time when it comes to our jobs. Yes,” she laughs, “we are a little late (10 or 15 minutes) when it comes to dates and the pleasures of life. But” again she laughs, “we don’t want people to think that we have nothing better to do! We love our parties, but we also love our work.”

I carried on, “What other languages do you speak?”

She answers between laughter and isolated confidence, “Other than Spanish, French that I learned at the University; however, little by little I’m losing it since I don’t practice it anymore. I do know a little Chinese, I’m at a HSK level 3 and English that I now practice with my foreign and Chinese friends at the Salon, and workmates/students, etc.”

My next topic, “What do you miss about Spain?”

Her voice gets sentimental, but steady, “I miss of course my family, a good paella and tortilla (Egg omelet with onions, cheese and meats inside.) Ah heaven, as a matter of fact, I’m not very good at making paellas, and on the other hand I can make a great tortilla!”

I want to touch another common topic talked about in China, “What are the positives and negatives when teaching in this country?”

She answers passionately, “The negatives stem from the shyness that they have, but that isn’t the real problem.” Which was enlightening for me, “It is more about how they learn languages. They use a translation system from Chinese that is old and outdated. While we in Europe learn the language from the essence for our daily life and usage. That is why it is so hard for Chinese to learn another language. Basically, they are learning it the wrong way. However, that is why we are here, to do our best and correct that imperfection. The positives are many, extreme forms of kindness and the way they want to help the teacher out. They are willing to do their best, even when they don’t have the best education to do it. That says/tells me a lot about the students in the West who are pampered and sometimes with a better educational system, they still are too lazy and don’t want to learn. Here, Chinese are driven!”

I go at her again with another question, “What is China like for a young woman?”

She giggles again a little, “Harder to get a boyfriend, that is easier for you guys, but not for us. For me, if I was to have a boyfriend, Chinese or not, we will have to deal with our respective cultures with respect and at times change our mentality to be able to deal with the differences, and become a better couple, I guess.”

I go for the last question, “What angers you as a woman?”

Her voice becomes tense/terse, “I have a very easygoing attitude/mentality/personality, but when I explode, be careful! I hate machismo attitudes that hurt women. I am quite passive, till I start an argument. Most times, I don’t argue with ‘little men with small minds’… It is a waste of time to be honest. We have the same rights to be educated as others. Other things which bother me, I get extremely irritated when also dealing with incompetence. What I want for the future is to not feel this way, impotent and without a voice. I believe my opinion and voice should have substance to help other females/women and standout. I also want the situation to get better back in the Spain that I love. That is all I would like, so I don’t have to feel this way. For the most part, my life is quite good and happy, therefore, I am thankful for what I have. My feeling, I am extremely lucky!”