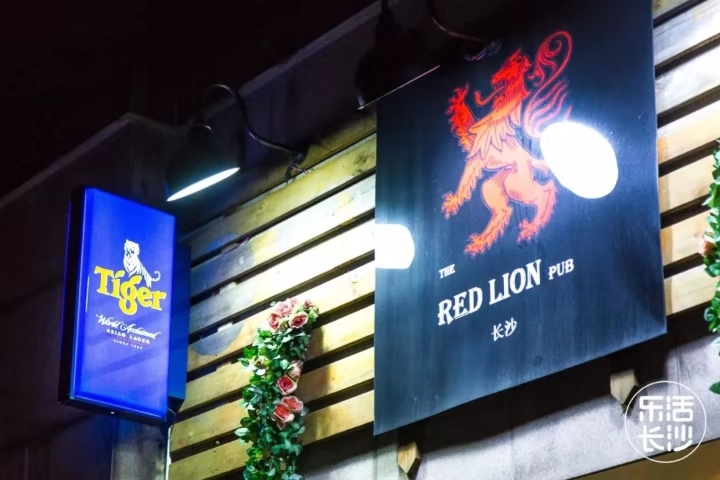 (22 November 2021 – Changsha, Hunan) – Into the backstreets, near Wuyi Square’s touristic and international food gathering, there is the vibrancy of the nightlife. Here, near Peiyuanqiao metro station (line 1), just 100 meters, there is a quaint-little bar. Small does not mean it isn’t special. Walking down into this sector of back ended backstreets there is the Red Lion Pub, if you blink more than once you might miss it; but once it is found, there is that airiness and stylish way about it. One can notice soon after the typical Red Lion from England. It feels like [soon enough] there will be a cross of St. George just sprouting from the walls. Many symbolisms from the U.K. come to light, but these are mostly the ones which make references to England. Call it what you will, but the Red Lion Pub is located here in Changsha, Hunan and it is literally expat central and its haven.

Once inside, there is that spirit or call it the ‘Englishness’ about the entire thing. The bar or I rather say, pub gives the customer a chance to dream about the delightful brews.

Usually, the Red Lion Pub will host a series of events; whether it is stand-up comedy, a musical-jam session, a place to watch the football matches (you know, for those Manchester United fans), there are the Halloween gatherings, costume parties, Guy Fawkes Day, Thanksgiving (since the Pub sometimes can become Americanized for the American and Canadian expats) and Christmas.

Taking a moment to see and always notice the photos in the We-chat moments, there was a necessity to dream of what this entire night would become. Therefore, I came. It was Damion Braithwaite’s birthday, and it was his night to celebrate! The publican and owner of the Red Lion. At this moment, this celebratory time was an all-out extravaganza to just feast the eyes, senses, palate, hangout and eat. Happiness came with a constant “Cheers!” and merriness in the air. Drinks came and went, with the pleasures of the night and the ‘eye candy’ to everyone’s delight. The dinner-styled buffet was one with: crème potatoes, broccoli (also in delicious sauce), sandwiches and the lovely spices of the biriani (thanks, Rahi).

Damion gives a charming smile and laughs. Here is a man with spirit, who is unique with the times. A man who has hit middle-aged, but with an energy and vibrant-strength of a 16-year-old. This is the Red Lion, his pleasure dome or ‘mancave’, where most of his business is conducted when he is not teaching, conducting drama rehearsals/classes on Harry Potter skits, or doing his bid with the school newspaper. Changsha is his oyster, and he is here to enjoy it, whether it is as a publican, business professional or teacher/performer. Yes, Damion wears many hats; however, the most befitting one is when his Englishness spurts out with his dapper suits and top hat!

With a delicate ‘envy’ one must ask his/herself, “how does he do it?”

For all his time in China, Damion has certainly had to work his ‘bum’ off for it, and it hasn’t come easy. Since he is a man active on the Changsha scene. All who know him, consider him to some extent, ‘The Foreign Mayor of Changsha’ (excuse the humor, but yes, he is considered this by some).

But tonight’s the night and it is different. He places these issues aside to be able to have a little fun. This is one to remember. There is the ‘Chineseness’ mixed in the ‘Britishness’. However, there are foreigners from America, South Africa, and France as well.

What are the meals typically like at the Red Lion? Tonight’s a buffet. But [on average and most nights] the meals are a mixed between British and American-styled cuisine or with the normalcy of life coming into context. With the “Aloha” fast food joint next door, many of the patrons will enter the Red Lion to have their drinks and order on the side their hotdogs or ‘Aloha Burgers’. Man, this is fine by me, once I don’t have to move and can continue ‘nursing’ my Guinness or the many more which will come after. Other patrons order their rum with coke, some will ask for a whisky, while most consumed the ‘Spitfire’ Ale. The latter is for a hearty palate, but goes down deliciously with that thing called, strength.

Tonight, I find this night rather gorgeous, with the soft droplets of rain in the beautiful twilight. This edge is manifesting into something that goes into the throes of a wonderful party. With people saying, “Baby, put your hands up!” and screams from the D.J. (Disc Jockey) hypnotize everybody into action and a dance that has all under a spell. Call the DJ a Pied Piper of sorts with music. The night air can be mixed with a little-cold chill here in Changsha, but the level of body sweat, and the heat continues to arise. I have to confess, I was transported back to my ‘glory days’ when I was back in England listing to: Depeche Mode, Nick Kamen or Robbie Williams for that matter.

By the end of the night, I walked out into the rain. It is still soft and refreshing, as the heat arises from the ground, engulfing the air. This is an experience I must repeat for the memory to serve me right and with that in mind, I think next time, I will ask Damion to allow me to become a bartender for a couple of hours to experience the feeling, exhilaration, ‘heartbreak’ or ‘headache’ which goes with serving drinks. For now, I will dream again of another night and hopefully, more birthdays and celebrations to come at the Red Lion. Cheers, and welcome to come with me!