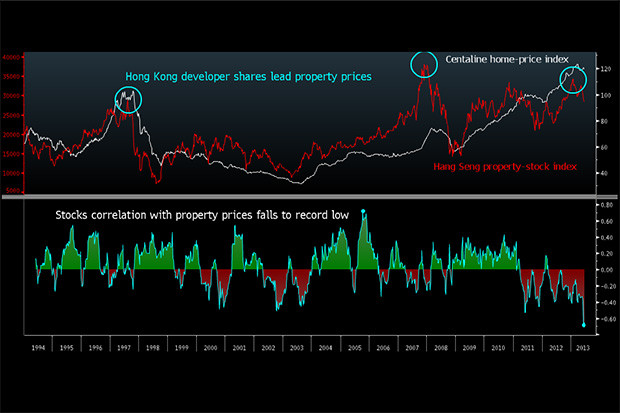 Hong Kong real estate has become more unhinged from the city’s stock market than ever before as shares of developers tumble while property prices stay near record highs.

Children play on rocks by the waterfront across from residential buildings in the Stanley area of Hong Kong, China. Photographer: Jerome Favre/Bloomberg

The CHART OF THE DAY’s lower panel shows the 20-week correlation between Centaline Property Agency Ltd.’s housing-price gauge and the Hang Seng Property Index has dropped to minus 0.68 this month, the lowest level since Bloomberg began compiling the data in 1994. The Centaline index slipped 3 percent from its peak in March through its most recent report on June 16, while the stock index, which includes Sun Hung Kai Properties Ltd. (16) and Cheung Kong Holdings Ltd. (1), declined 19 percent from this year’s high on Jan. 28 through yesterday.

Housing prices in Hong Kong, the world’s most expensive property market, have remained elevated even after the government imposed an extra 15 percent tax in October on purchases by companies and non-residents, and pledged to boost land supply to make homes more affordable. The retreat in developer shares suggests property prices will eventually tumble, said Arthur Kwong, head of Asia Pacific equities at BNP Paribas Investment Partners, which manages about $658 billion.

“I would believe the stock market,” Kwong said in a June 19 interview in Hong Kong. “That leads to the conclusion that this time the property market may collapse quite badly.”

Losses in real estate stocks in 1997 and 2007 foreshadowed declines of at least 20 percent in the Centaline index, data compiled by Bloomberg show. Cheung Kong, which is controlled by Asia’s richest man Li Ka-shing, and Sun Hung Kai (16) are among the world’s four-biggest property developers by market value. Home prices more than doubled since the start of 2009 as the Hong Kong dollar’s peg to its U.S. counterpart kept borrowing costs in the city at near-record lows.

Stocks have a bigger pool of investors who set prices with thousands of daily trades, making the market more efficient than property, where there are fewer transactions, said Kwong. Home sales in Hong Kong fell for a third consecutive month in May and have declined 71 percent from their post-global financial crisis peak in 2010, according to land registry figures.