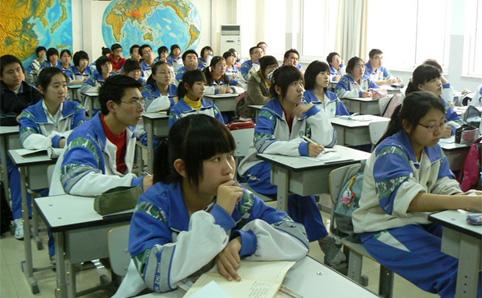 BEIJING — Next week, millions of fifth graders across China will struggle with their end-of-year examinations. And, with just one year of elementary education left, their parents will struggle with choosing a high school for them.

For many cosmopolitan Chinese parents, the agonized deliberations look like this: How Chinese should our child’s education be? How Western? Is there a middle ground?

“I have a friend who couldn’t sleep at night because of this. She nearly went mad,” said Ms. Ma, the mother of a fifth grader at the state-run Fangcaodi Elementary School in Beijing, which my son also attends. “Don’t become like that!” she advised me.

Ms. Ma is perplexed by the challenge of choosing a high school for her 11-year-old. “I’m really worried about his future studies,” she said. She took her son to the United States in May to tour schools, but that didn’t produce a decision.

“He feels American, but his friends are here. He wants to stay here. I feel that China’s basic education is very good, but, for later, I want him to have the space to explore and create, not just learn from books,” said Ms. Ma, who only offered her surname.

Then there’s the values issue, which is inclining her toward the United States.

“I think traditional Chinese values and morals are very good,” she said. “But they don’t exist anymore. And he has to learn how to be an upright person.”

Parents’ concerns here can be very intense, in part perhaps reflecting a “tiger mom” or “wolf dad” mentality. But they also speak to a deeply held cultural identity. As China grows in influence, many here believe their children will be a core part of the globalized future. And like parents everywhere, they want what’s best for them.

Some are leaning toward a more Chinese education, out of concern that the language is just too difficult. Miss these formative years and, you never catch up.

“I think it’s difficult to have a truly bilingual education,” said Qiu Dong, the mother of another fifth grader. “I think you have to pick a language.”

After years in the United States, she and her family are back in China. She tried an international school, a bilingual school and, now, a Chinese one for her two sons, and thinks the Chinese route works best. In order to ensure her children’s future here, if that’s what they want one day.

“If you want your kids to really learn the language, then elementary isn’t enough,” said Ms. Qiu, drawing on her own experiences as a child. She was 15 when she left for the United States with her 10-year-old sister. Today, “the difference is huge,” she said. Ms. Qiu is fluent in Chinese, including the written language. Her sister is not.

“You need the classical Chinese, know how it works, the forms and the structure of the language,” she said. “You have to understand not just the language but the whole cultural context. You have to know how the system operates.”

For her, the answer is another elite Chinese school. Like quite a few parents at Fangcaodi, she hopes her son, Oliver, passes highly competitive tests for the No. 4 High School, one of the best-regarded in the country.

“The reality is that our children are living in two cultures,” said Ms. Zhang.

For Ms. Zhang, unlike Ms. Ma or Ms. Qiu, money is an issue, as it is for many. Natalie spent some time at an international school in Beijing, but the cost was crippling. “It was my whole savings!” said Ms. Zhang. “I can’t do that.”

International schools in the capital cost around 230,000 renminbi, or more than $37,000, for annual tuition alone, depending on the child’s age.

Another negative for some globalized Chinese parents is the expatriate “bubble” they see at international schools, which they feel keeps children apart from the “real” China. Some say Chinese children may be at a social as well as linguistic disadvantage there.

Ms. Zhang says state-run Chinese schools will teach better Chinese and demand of students an old-fashioned respect for their elders. She’s happy with that. Her daughter feels German, but “we have to teach the kids how to take the best of both worlds,” Ms. Zhang said. “This is the next generation, and the world will look like that.”

Many parents like Ms. Zhang prefer the idea of international streams within Chinese schools. But there are concerns: These may be halfway houses that don’t really nail either the Chinese or the Western curriculum. State schools are tightly managed by the education authorities and the Communist Party, and parents have little input. Some worry foreign teachers hired by these schools, often through agencies whose decisions and finances are opaque, are hired too cheaply and may be inexperienced.

It is, perhaps, no wonder that some parents are losing sleep over their choice. They want the critical thinking and creativity of Western education but not the very high fees and expatriate “bubble” of international schools; the cultural immersion, language and math skills of Chinese schools but not the very long hours and competitiveness that can cause burnout. They want their kids to be moral and truly global, to be both Chinese and Western. No school seems to offer all that. And with much at stake amid this conflicting mix of values, the choice feels truly difficult for many.