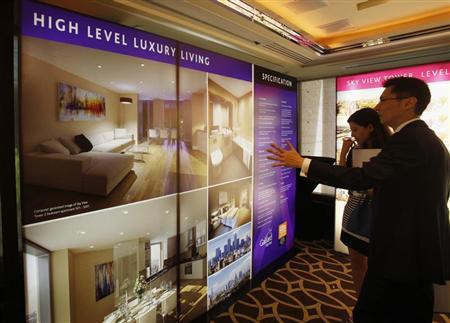 (Reuters) – On the seventh floor of a luxury hotel in the heart of Hong Kong, a Chinese couple listens carefully as an agent takes them on a virtual tour of an upmarket property development for sale – not in the former British colony, but in London.

Cash-rich mainland Chinese, who some in Hong Kong blame for pushing property prices to record highs, have fled the city’s real estate market, scared off by cooling measures that have sent them scouring overseas for better options.

For many, the search starts in the ballrooms of Hong Kong’s luxury hotels which host overseas property fairs nearly every weekend, offering prospective buyers a glimpse of homes abroad while providing refreshments such as sparkling water and the bite-sized Cantonese snack dim sum.

“We can only see pictures of the project now so that’s why we have to go to London to take a look at the environment of the building,” said Christina Chen, who flew with her husband from Shanghai to Hong Kong to check out plans of a development at London’s Olympic Park before flying there herself to see it.

“The return on investment is much higher in London than in China and Hong Kong,” she said in a room at the Landmark Mandarin Oriental, a popular choice for property exhibitors.

Mainland Chinese accounted for 18 percent of new luxury home sales in Hong Kong in the first quarter – the lowest level in four years – down from 43 percent in the third quarter of last year, before cooling measures were announced, according to real estate company Centaline Property Agency.

Hong Kong, where property prices are among the most expensive in the world, has imposed a series of tightening steps since October, including a 15 percent tax on foreigners that many industry watchers believe was targeted at mainland buyers.

“Mainland Chinese have lost the ticket to buy properties in Hong Kong, now that tightening measures are in force,” said David Hui, overseas sales director at Centaline. “If they want to invest in property, they now need to go overseas.”

The flight abroad has taken them increasingly to Britain and the United States, where Chinese rank alongside Canadians as the fastest-growing group of buyers, data from the U.S. National Association of Realtors shows.

In London, overseas buyers accounted for 2.2 billion pounds worth of new-build property in 2012, up from 1.8 billion pounds in 2011, according to estate agent Knight Frank. Buyers from greaterChina are among the top three.

The search for homes has accelerated, with Hong Kong’s overseas property transactions jumping nearly 50 percent in May from a year earlier – of which mainland Chinese made up a fifth of sales, according to two property agents in the city.

More than 40 offshore projects are on offer in Hong Kong this month, most with price tags below HK$7 million (585,000 pounds), with lawyers and bank representatives on hand for quick sales.

Cherrin Loo, director of international residential sales at property consultant Savills, said she expected the number of overseas projects on show in Hong Kong this year to jump 30 to 50 percent from a year earlier.

Another popular choice is Vancouver, where about 25 percent of the city’s more than 600,000 residents speak Chinese as a first language. Sun Hung Kai Properties Ltd (0016.HK), Hong Kong’s largest developer, sold almost 90 percent of units on offer in Hong Kong for its River Green project in the Canadian city within a month when it debuted last month.

About half of those sales went to Chinese buyers, according to Centaline Property Agency.

With a significant drop in mainland Chinese buyers, Hong Kong developers have shifted their focus back to local end-users, with some cutting prices to lure buyers.

In May, the number of Hong Kong property transactions stood at its second lowest in 16 months, up 20.5 percent, according to Centaline Property Agency.

Analysts expect the city’s developers, including Cheung Kong (Holdings) Ltd (0001.HK), controlled by the city’s richest man Li Ka-shing, to cut the premium – the difference between new launches and second-hand homes – of new projects by 15 to 20 percent in 2013 to attract local buyers.

“The local market is our new focus,” said Billy Chan, an agent at Hong Kong Property Services. He has sold just one residential unit this year – to a local buyer – compared with 10 in 2012, half of which went to mainland Chinese buyers. “We don’t have much opportunity from Chinese buyers now,” Chan said.