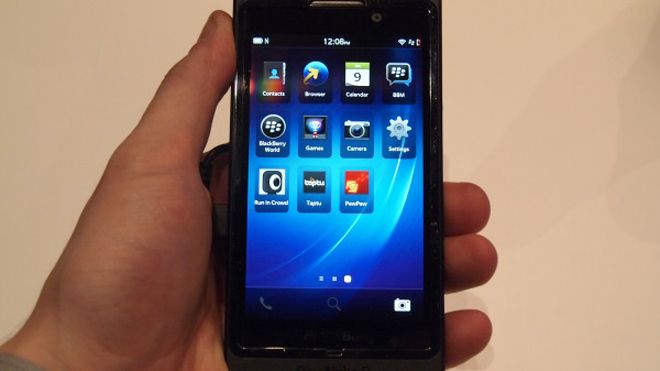 After a long wait, BlackBerry’s new smartphone — the BlackBerry Z10 — was launched in Canadian stores today.

There is still no certain date for the launch in Hong Kong but small shops at Sindah shopping mall in Mong Kok are expected to be selling models imported from Canada sometime next week.

While there weren’t the long lineups typical of an Apple launch, both Rogers and Bell reported strong demand for the phone, with 50 per cent of pre-orders coming from non-BlackBerry users, according to independent technology analyst Chris Umiastowski.

The move comes after several delays left some longtime BlackBerry fans sticking with their older phones or switching to a competitor’s phone.

BlackBerry has fallen well behind since dominating the smartphone market five years ago, offering no strong answer to Apple’s iPhone or Google’s Android platform.

But BlackBerry CEO Thorsten Heins told CBC Radio’s The Current that the company’s fall has been exaggerated.

“We’re still selling seven million units by the quarter, so there still is a very loyal audience.

“What also happened is that we went global,” Heins said, pointing to growth in Asia, the Middle East and Africa. “We’re rocking in those markets.”

For today at least, the focus for the BlackBerry boss is on Canada, attending a launch event with the CEO of Rogers, BlackBerry’s launch partner. “It’s important to perform in your home market, because it sends a message.”

Research in Motion — now simply named BlackBerry — had just 4.5 per cent of the Canadian smartphone market in the fourth quarter of 2012, less than a tenth of Apple’s market-leading 47.5 per cent, according a preliminary estimate compiled by IDC. Samsung was second with 32.7 per cent, followed by LG with 4.6 per cent.

The company blew much of the free goodwill it had built with once-happy BlackBerry owners, who were increasingly lured away by Apple and Samsung, said Kevin Restivo, a senior analyst with IDC Canada.

In the fall of 2009, IDC had BlackBerry pegged to finish the year with about 67 per cent of Canada’s smartphone market and Apple was targeting 15 per cent. Globally, RIM had about 20 per cent of the market.