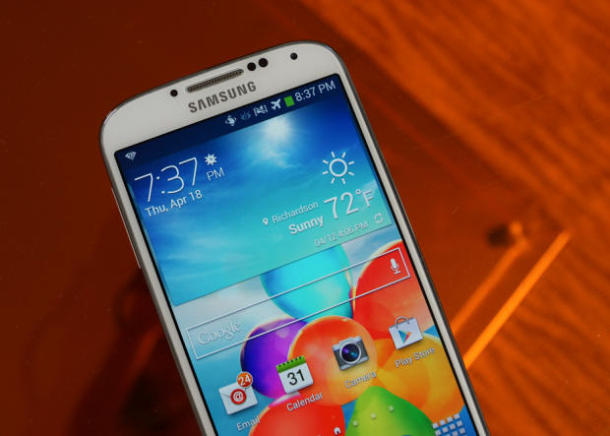 Samsung’s 2013 flagship phone, the Galaxy S4, has been a smashing success, so it’s no wonder people are already guessing about its successor. I’m presuming that the next phone will be named the Galaxy S5, but even that’s up in the air.

Though the Galaxy S4 was released in March, rumors started flying about the next Galaxy flagship phone just a few months later. We’re tracking all the buzz about the new phone’s supposed design, materials, and upgrades to the camera and other features. We’ll continue to update the post as new reports come in, but if we miss anything, let us know in the comments below.

December 31, 2013
New Samsung chip hints at 4GB of RAM for Galaxy S5
Samsung unveiled a new chip that could reveal what’s to come with its future smartphones. TheLPDDR4 is a 8-gigabit (1GB) low-power DDR4 memory chip. It’s not much on its own, but put four chips together in a smartphone and you could get 4GB of RAM, says Samsung. That’s one gigabyte more of RAM than what’s in the powerful and snappy Galaxy Note 3, which means whichever phone gets these new chips could be blazing-fast.

December 23, 2013
No curved display for S5
Though Samsung gave us the curvy (and massive) Galaxy Grand in 2013, the Galaxy S5 won’t sport a curved body or display. That’s according to analyst Kim Jong-hyun, from Seoul-based Eugene Investment & Securities, who spoked to the The Korea Herald. Jong-hyun notes that Samsung is struggling to produce enough curved displays for its current devices, so it’s unlikely that the company could also be making enough for a new Galaxy flagship phone that’s slated to launch in spring 2014. Instead, we could see a separate curved phone from Samsung later in 2014, which would likely be a follow-up to the Galaxy Grand.

December 17, 2013
Step aside, TouchID; the Galaxy S5 could have an eye scanner
Unlocking your phone with your fingerprint might soon become passé. According to rumors, Samsung is working on an iris scanner for the S5 that would scan your eye and unlock your phone. The report comes from CNET sister site ZDNet Korea, and claims that Samsung could debut the phone at Mobile World Congress in late February 2014.

December 4, 2013
Spotted in the wild: A possible Galaxy S5
Some promising new details about the S5 have emerged from benchmark site GFXBench. Apparently the new handset will run Android 4.4 KitKat when it ships, have a Snapdragon 800 processor running up to 2.5GHz, and, wait for it, sport a stunning 1440p, 2,560×1,440-pixel-resolution display. That makes earlier rumors that the S5 will have a 5-inch, 560-pixels-per-inch screen seem a bit more plausible.

Galaxy S5 could be one of five smartphones from Samsung in early 2014
Samsung’s next flagship phone might have some competition if this rumor is true. Korean siteETNews says that Samsung is planning to launch five, yes, five, new smartphones in the first quarter of 2014. Supposedly, the new phones could include the Galaxy S5, a cheaper version of the Galaxy Note 3, and perhaps a hybrid of the Galaxy Grand and the Grand 2 called the Samsung Galaxy Grand Lite. While five devices released close together seems a bit absurd, it’s likely that Samsung could launch a bevy of new phones for different markets, including a global model or two and a few for emerging areas such as India and South America.

December 3, 2013
The S5 will only have a metal body
Earlier rumors hinted that the next Galaxy S would have a metal unibody design with a less expensive polycarbonate model. Now, Japanese site EMSOne says that there will only be one model, and it’s only available in metal. Sources say that Samsung has placed an order from Taiwanese parts supplier Catcher to produce 10 million and 30 million unibody metal cases.

November 29, 2013
S5 is coming soon, really soon
A report from ETNews is claiming that the Galaxy S5 will grace store shelves sometime in February or March 2014, a few months earlier than the S4’s first birthday. Earlier rumors had said the phone would be announced in January. Instead, ETNews is saying that production is slated to begin in January.

November 15, 2013
Next flagship Galaxy device could have a wraparound display
In one of the most eyebrow-raising rumors out there, Bloomberg wrote that Samsung will debut a phone with a three-sided wraparound display in 2014. Details are, of course, fuzzy, but it’s said that the display would wrap around the edges of the phone, allowing you to view messages at different angles. Also, the three sides could operate independently, showing different information on different edges. There’s no guarantee that this will happen, or that it will even show up in the S5, but it’s one of the most interesting rumors nonetheless.

November 7, 2013
The Galaxy S5’s camera could have Samsung’s Isocell technology
We’ve already heard murmurs that the S5 will sport a 16-megapixel camera; now there’s talk that it will also get Samsung’s Isocell camera sensor, which promises better image quality. This news is more fact than rumor, as it comes straight from Samsung. During the Korean company’s Analyst Day, Samsung said the phones it releases in 2014 and 2015 will get Isocell. So far, though, Samsung hasn’t confirmed that the Galaxy S5 even exists.

October 11, 2013
Look for the Galaxy S5 in January 2014
It seems that Samsung is in a rush to get the Galaxy S5 on the market. News from Korean siteNaver, which was founded by ex-Samsung staffers, says that the Korean manufacturer will debut the S5 in January 2014. The phone will have a 16-megapixel camera with optical image stabilization and Samsung’s Exynos processor, according to the report.

October 7, 2013
Samsung’s new smartphone camera could be brighter
New details from patent-tracking site Patent Bolt back up earlier gossip that Samsung’s new smartphones (including the putative S5) could come with much better cameras. It says that Samsung has been building a new 13-megapixel camera that uses less power, and, more importantly, takes brighter, more vibrant pictures. In fact, it’s said to be eight times brighter than the cameras on current Galaxy devices.

September 25, 2013
Samsung’s next flagship might be called the Galaxy F, not S5
Is Samsung is ditching the Galaxy S name? ETNews reports that the next flagship device, aka the most high-end model in Samsung’s lineup, will be named the Galaxy F. It’s possible that the Galaxy F could be a new device altogether that launches separately from the Galaxy S5, but the F’s alleged features and specs match up with earlier buzz for the S5. Namely, the Samsung Galaxy F is said to have an octa-core processor, a 16-megapixel camera with optical image stabilization, and a metal case.

September 17, 2013
Two flavors of Samsung Galaxy S5: Android and Tizen?
This rumor, hailing from CNET’s UK site, says that the Galaxy S5 could have two operating system options at launch. One will run Android, as we’d all expect it to, the other would run another Linux-based OS called Tizen, which was developed in part by Samsung. The argument for Tizen is that when an Android phone is sold, a cut goes to Google. Google also gets to continually make money when you view ads on your phone and download apps from the Play store. With it’s own operating system running on the phone, Samsung gets to keep more cash in its pockets.

August 29, 2013
S5 to sport an aluminum case
Samsung may ditch the plastic with the next Galaxy S, opting instead for metal according to a rumor. ETNews says the new phone will have an aluminum or other metal housing.