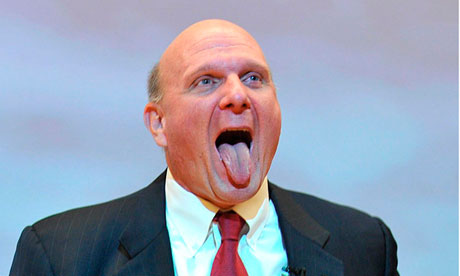 Steve Ballmer, the C.E.O. of Microsoft, finally figured out a way to make some money for himself: he quit. This morning, Ballmer announced that he will retire within the next twelve months. The company’s stock surged; Ballmer is now worth about a billion dollars more than he was on Thursday.

Steve Ballmer started at Microsoft in 1980, arriving from Procter & Gamble to become Bill Gates’ first business manager. After 20 years at the heart of Gates’ team he took over as chief executive, reportedly after-relations between the two had become strained.

His testosterone-fuelled presentational style was the most visible contrast to the geekish, entrepreneurial enthusiasm of Gates. Clips of Ballmer manically leaping and screaming across the stage at Microsoft sales staff events, professing his “love” for the company, have received more than 5m hits on YouTube.

Ballmer oversaw a dramatic shift away from Microsoft’s PC roots, acquiring Skype and pushing into cloud computing. As new competitors emerged, he promised to “out-innovate Google” and even, on one occasion in 2004, allegedly vowed to “kill Google”, hurling a chair across the room. Balmer has said descriptions of the outburst were exaggerated.

What has gone wrong? For starters, Ballmer proved to be the anti-Steve Jobs. He missed every major trend in technology. His innovations failed Microsoft fans expectations. When Windows Vista was released to the public back in 2006, customers rushed to stores to buy computers that ran Windows XP. Now that Windows 8 is out, you see the same outcome. Customers complain about the user experience and even some stores in Hong Kong provide Windows 8 “downgrade” services to Windows 7.

Ballmer couldn’t see the potential of the iPhone in 2007 just because he was too busy developing Windows Mobile that later became Windows Phone.  At an interview with Guy Kawasaki in 2008 at Mix, Ballmer even laughed at the iPhone claiming that it would never become successful because it doesn’t have a physical keyboard and that it was overpriced. Ballmer certainly didn’t see potential on the iPad either.

Ballmer strategies were obsolete and couldn’t cope up with the changes in the market. The Windows Mobile (now Windows Phone) only got an app store years after the first iPhone was released. Until then, it was really difficult for the average user to install their apps on a Windows phone.

Microsoft also didn’t see potential on Google Docs back in 2005 but it is now trying to catch up with Microsoft Web Office. For me, it seems like Microsoft is running behind the market, trying to follow the tendency instead of leading it.

What comes next for Ballmer? He’s just fifty-seven, a couple years younger than Gorbachev was when he left. But I think he’ll be quiet: doing good deeds, giving away his fortune, and popping up his head from time to time. The more important question is what comes next for Microsoft—an American company, founded by a skinny nerd, that provides software used around the world. Reversing the company’s decline, in an industry that transforms itself by the day, won’t be easy; Microsoft needs someone who can attract brilliant developers as well as she anticipates trends. They need someone very different from Ballmer. In his memo to Microsoft employees, he wrote, “I cherish my Microsoft ownership, and look forward to continuing as one of Microsoft’s largest owners.” Given the size of his financial stake in the company, there’s almost no one who should want a better C.E.O. for Microsoft than Ballmer himself.