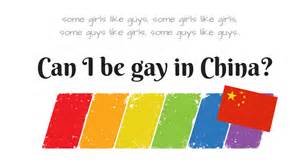 There are those who deny the advent of lesbianism and how it’s now affecting the people who are married and divorced throughout China.

Being gay is still considered by some of the older generation a disease, like a mental illness.  These people are usually those over 50 with homophobic views.

But you also have a younger generation who can’t understand why would a man would want to lay with a man and a woman with a woman.

In this case, all I can add is, love is love!  When desire pulls us together, nothing can stop a person, even if it goes against the grain and traditional norms of society.

As I intended to gather information about the gay community once again, it never ceases to amaze me how in the beginning there are those who deny this growing phenomena and say blatantly out loud, “No, not in my city!”

I’ve seen it happen over and over in cities like: Hangzhou, Nanjing, Xi’an and Chengdu.  Centers where there’s a current and steadily growing LBGT population. Secretly or openly, it doesn’t matter, but it’s certainly happening.  There’s no denying it!

In the past, I’ve written about homosexuality, but what about the other ‘side of the coin’, lesbianism.  Women loving women, what about them?  In truth, I have to say, I know very few.

Therefore, this was my time for exploration and what did I find?

For cities like Chengdu, it’s an ‘open’ secret that this is the lesbian capital of China.

Women are often getting together and coupling up.  It’s not that it isn’t happening among younger-lesbian couples in their 20s.

However, it’s happening frequently with women in their 30s.  Some are divorcees already with children and decide that it’s time to live together like a family.  Even when they aren’t allowed to marry.  The two females become one to raise a child.

Why is this happening?

For one, women understand women better, their needs and desires.  Sadly and truthfully, most men don’t.

Therefore, we can’t say all women are inclined to lesbianism, because this isn’t a fact. They’re still a minority group.

But in China people are exploring more and more their sexuality.  They often find love with the same sex in a better and more comprehensive way.

This is the case for single-mothers raising a child and feeling that their men have turned their backs against them.

Yes, these women are still are minority, but steadily growing throughout China.

As I travel, I can frequently see these two-mommy home and with a baby.

Now, those who engage in lesbianism know all too well the brutal reality of rejection and prejudice. So, till then, they choose to live secretly until one day the system allows for them to marry.

This is more than Katy Perry’s song, “I kissed a girl”.

It’s knowing what makes you happy and chasing after your dream.  Even if it’s with women falling in love with women and raising a child together.

What better way to manifest another-almost perfect form of love between two people. This is in their own world, the perfection of lesbianism.