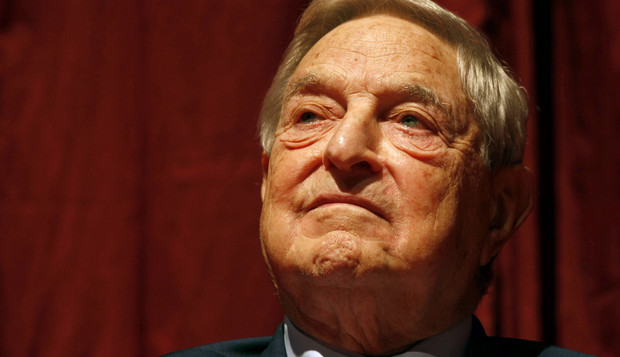 George Soros probably shouldn’t expect any warm invitations to Beijing — not with the much-reviled short seller warning of a giant Chinese crash.

The billionaire first shook a major government in September 1992, when he led an attack on the British pound. For his role in humiliating London and forcing John Major’s government to exit the European exchange-rate mechanism — essentially the euro — Soros reportedly netted $2 billion. Soros made a bundle off America’s subprime debt crisis as well. Here in Asia, his legend has loomed large since 1997, when then-Malaysian Prime Minister Mahathir Mohamad accused him, bizarrely, of heading a Jewish conspiracy to spark an Asian crisis.

Now Soros has his eye on China. In a Jan. 2 op-ed for Project Syndicate, Soros didn’t say whether he’s shorting China. But he did connect the dots in a way that can’t make President Xi Jinping happy. To Soros, the main risk facing the world isn’t the euro, the U.S. Congress or a Japanese asset bubble, but a Chinese debt disaster that’s unfolding in plain sight.

“There is an unresolved self-contradiction in China’s current policies: restarting the furnaces also reignites exponential debt growth, which cannot be sustained for much longer than a couple of years,” Soros wrote.

Xi would be negligent to ignore Soros’s warnings. He’s hardly alone: Peking University professor Michael Pettis and Jim Chanos of Kynikos Associates have been beating this drum for years. Silvercrest Asset Management’s Patrick Chovanec worries about a “shadow” Chinese balance sheet that would be keeping policy makers awake around the globe, if Beijing’s obsessive opacity weren’t concealing the problem. (You can read his latest concerns in this Jan. 3 Bloomberg View op-ed.)

China would never admit to basing policy on outsiders’ warnings. Still, it’s interesting to see the flurry of official Chinese moves this week aimed at reining in the shadow banking sector. On Monday, for example, China’s Cabinet imposed new controls on the multitrillion-dollar sector, targeted off-the-books loans, and promised to beef up enforcement of current rules.

I’m thinking we need to call this industry what it really is: China’s answer to Enron. The Houston-based Enron’s real business wasn’t energy and commodities, but book-cooking. The same holds true for China’s shadow-banking entities. They are the fuel Beijing uses “to restart the furnaces,” without attracting the notice of Moody’s, Standard & Poor’s or the U.S. Treasury Department.

China’s financial system is the ultimate black box. You don’t have to be a genius to conclude that when JPMorgan Chase estimates shadow banking to be 69 percent of China’s 2012 gross domestic product, it’s a wildly conservative guess. I wouldn’t quite add a zero, but if China fudges trade and other run-of-the-mill data, you can imagine the lengths to which it goes to hide the magnitude of its credit bubble.

“There are some eerie resemblances with the financial conditions that prevailed in the U.S. in the years preceding the crash of 2008,” Soros wrote. “But there is a significant difference. In the U.S., financial markets tend to dominate politics; in China, the state owns the banks and the bulk of the economy, and the Communist Party controls the state-owned enterprises.” He added: “How and when this contradiction will be resolved will have profound consequences for China and the world.”

The problem, as economist Stephen Roach sees it, is China’s propensity for thinking that slogans are sufficient. There is an inherent disconnect between lofty pledges of economic reform, sustainable growth and public accountability, and Xi’s repeated assurances that China can grow north of 7 percent a year. China can either restructure its economy or grow rapidly — it can’t do both. Bottom line, the higher China’s growth rate, the less retooling that’s going on and the more debt the nation is amassing behind the scenes.

The need to restructure applies to Beijing, too. The untold part of last year’s Bo Xilai story was that he was merely the vanguard of ambitious local officials looking to build the next Shanghai. Bo’s greater Chongqing area comes pretty close, boasting a population bigger than Shanghai’s and a skyline that rivals New York’s. The way such regional leaders win Beijing’s attention is rapid growth. That means all around China, far from Beijing’s view, are dozens of nascent super cities all borrowing like mad to deliver big GDP numbers. They’re generated by massive projects to build highways, bridges, international airports, five-star hotels, universities, splashy art and sports centers, apartment villages, shopping arcades to welcome Gucci and Chanel and, of course, record-braking skyscrapers.

People haven’t make lots of money betting against China. But Soros is absolutely right that there’s a worrisome disconnect between China’s pledges to move away from excessive investment and overborrowing and toward a services-based economy without sacrificing rapid growth. If Xi doesn’t act now, Soros could make way more than $2 billion when things go awry and savage the global economy. Add a zero.