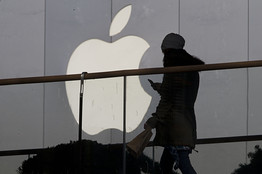 Tmall, launched in 2008, is a shopping website that hosts more than 70,000 merchants, including global brands like Nike Inc. and Gap Inc.Apple’s new Tmall storefront has a design similar to its own Chinese online store.

An Alibaba spokeswoman confirmed that the Tmall page is indeed Apple’s and that it opened recently, but declined to comment further. An Apple spokeswoman wasn’t immediately available for comment.

Analysts and investors are expecting stronger China sales for Apple, as China Mobile Ltd., the world’s largest mobile carrier with more than 700 million subscribers, will start selling iPhone on Jan. 17. Access to China Mobile’s customer base could give Apple a much-needed boost, as the U.S. company faces fierce competition in China from not only Samsung Electronics Co., but also a host of Chinese smartphone makers that offer inexpensive Android phones with advanced features. In the third quarter of 2013, Apple ranked fifth in China’s smartphone market with a 6% share by units sold, behind Samsung and several Chinese players, according to research firm Canalys.

Apple already runs its own online store in China, but its new Tmall store could provide a new channel to reach China’s fast-growing population of online shoppers.

Alibaba’s two shopping sites, Taobao and Tmall, are dominant in China, which some researchers say is close to overtaking the U.S. as the world’s biggest e-commerce market. Shoppers go to Taobao, a gigantic marketplace with seven million merchants and 800 million item listings, to look for low prices and surprises, while Tmall is more like an online department store with trusted brand names.

Tmall requires each seller to pay a deposit, an annual service fee and charges a commission on each transaction.

In another move that could get Chinese consumers in the mood to shop, Apple is gearing up for its Jan. 10 Red Friday promotions, an annual special discount event before Lunar New Year celebrations. On its official website, Apple describes it simply as a “special one-day shopping event” but doesn’t provide any information on what discounts it will offer on what products. The company is holding the event in China, Hong Kong and Singapore.