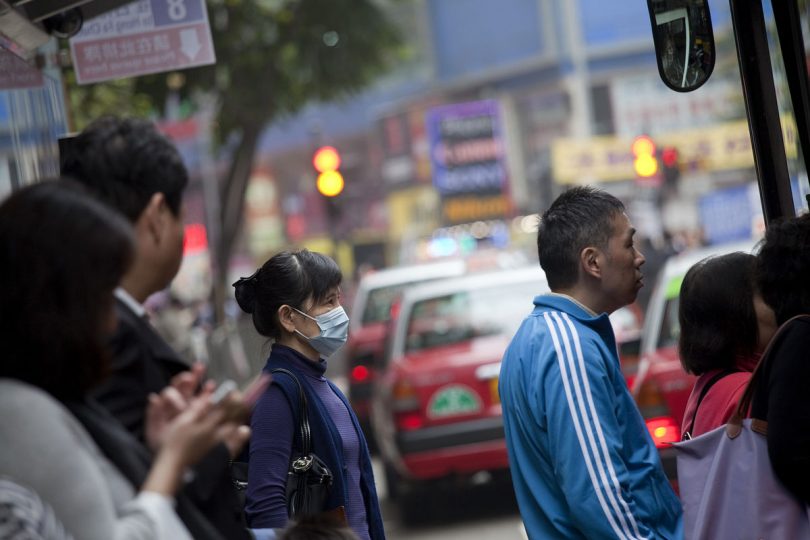 A roadside monitoring station inCauseway Bay reported air quality of 10 on a 10-point scale as of 2 p.m. local time, signaling “very high” health risks, according to the city’s air-quality health index website. When readings exceed the highest level, it triggers “serious” warnings and calls for children and elderly to stay indoors.

The new system, which calculates health risks based on ozone, nitrogen dioxide, sulfur dioxide and particulate matter that may be inhaled, is the first change to how Hong Kong gauges air quality since 1987 and comes as Chief Executive Leung Chun-ying has pledged to make curbing smog a priority. Beijing and other Chinese cities also introduced new monitoring systems starting in 2012 after criticism that authorities weren’t doing enough to control pollution.

Air pollution in Hong Kong has worsened since 2007 as a result of factory production across the border in China’s Pearl River Delta region and tens of thousands of vehicles running diesel engines within the city.

The government this year pledged HK$12 billion ($1.5 billion) in subsidies to replace old diesel vehicles gradually and limit their life-span to battle smog.

“Although the government has implemented policies to replace old vehicles, it hasn’t happened yet,” Kwong said. “In a few years’ time, maybe we can see the difference.”

Readings for particles smaller than 2.5 micrograms in diameter known as PM2.5 pollution, which pose the greatest risk to health, were 93.2 micrograms per cubic meter at the Causeway Bay station. That’s almost four times the World Health Organization recommendation for 24-hour exposure of no more than 25.

Pollution in some Chinese cities has reached much higher levels. In January, Beijing suffered its worst bout of bad air with peak PM2.5 readings exceeding 800 micrograms per cubic meter.Shanghai saw record levels of smog earlier this month, forcing flight cancellations and prompting the government to issue warnings to keep children indoors and order vehicles off the road. PM2.5 levels in Shanghai reached 602.2 on Dec. 6.