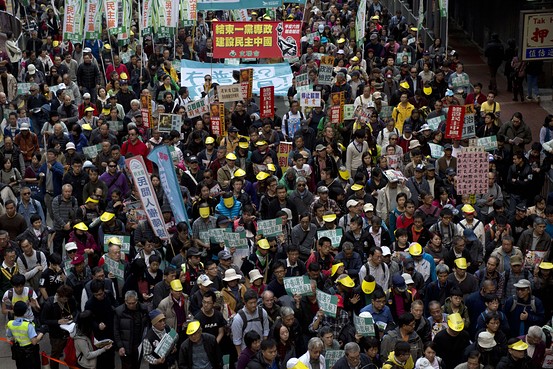 Thousands of protesters took to the streets in Hong Kong on New Year’s Day, Wednesday, calling for free elections as soon as possible and the resignation of leader Leung Chun-ying as dissatisfaction with the pace of democratization in this Chinese city mounted.

Demonstrators waved placards calling for universal suffrage and shouted slogans against Mr. Leung as they began marching at 3 p.m. Hong Kong time from Victoria Park in the east of Hong Kong’s main island to Central, the heart of the city’s business district. The rally ended at around 9:00 p.m., Protest organizers said 30,000 people participated, while police said there were 11,100 demonstrators at the peak of the protest.

“I want to have a greater say in choosing our leader. [Having that say] is very important to our next generation,” said 67-year-old Lee Chan Kiu, a manager at a construction company who brought his children and friends to the rally.

Although the former British colony returned to Chinese rule in 1997, it operates independent political and economic systems from China. The Basic Law, the city’s mini-constitution drafted before the handover, stipulates that the “ultimate aim” for Hong Kong is to eventually select its chief executive by universal suffrage. Beijing has pledged that Hong Kong will have a directly elected leader as early as 2017 when Mr. Leung’s term ends.

Since taking office in July 2012, Mr. Leung, Hong Kong’s third chief executive since the transition to Chinese rule, has been at the helm of an administration that has been beset by a series of political scandals and criminal investigations that have resulted in the departure of several top members of his team.

His approval rating also has been on a steady decline, according to the University of Hong Kong public-opinion program, at 42 on a scale of 0 to 100 in December, down from 49.2 a year ago. He had a rating of 40.6 in November, the lowest for a chief executive in office since July 2003, when former leader Tung Chee-hwa had a rating of 36.2 shortly after 500,000 residents took to the streets to demand his resignation. Hong Kong has a population of 7.2 million. Mr. Tung resigned from office in 2005.

Several cabinet members and top government officials have resigned from Mr. Leung’s administration in the past 18 months.

Former cabinet member Franklin Lam resigned in August, following a nine-month leave of absence prompted by public criticism that he sold residential properties just before the government imposed new measures to cool the city’s real-estate market. Mr. Lam has said the property sales were unrelated to government measures and that he didn’t have prior knowledge of the measures before they were brought in.

Three months before that, Barry Cheung stepped down from all the public posts he held after the police started an official inquiry into a company he founded. Mr. Cheung, who hasn’t been accused of any wrongdoing, said he would cooperate with the investigation.

The scandals hit as soon as Mr. Leung came into power. Then Development Secretary Mak Chai-kwong, who was convicted of defrauding the government on housing allowances, resigned less than two weeks after he was sworn into office in July 2012.

Mr. Leung’s team has also been under fire for its handling of several social and political issues. It tried unsuccessfully last year to make Chinese patriotism classes compulsory in schools, drawing protests from tens of thousands of students and teachers. As well, a more-recent decision by the government not to grant a new television license to an outspoken businessman sparked fresh protests from thousands, who accused the administration of trying to protect the interests of a pro-Beijing television station and depriving the city of a wider variety of TV programming.

Apart from protesting about Mr. Leung’s leadership, those marching Wednesday also pushed for a move toward universal suffrage before 2017.

In December, the Hong Kong government began a five-month process of consulting the public on a future electoral system that will determine how the chief executive will be chosen in 2017. Mr. Leung and previous chief executives have been chosen by a narrow election committee largely stacked with pro-Beijing and pro-business interests.