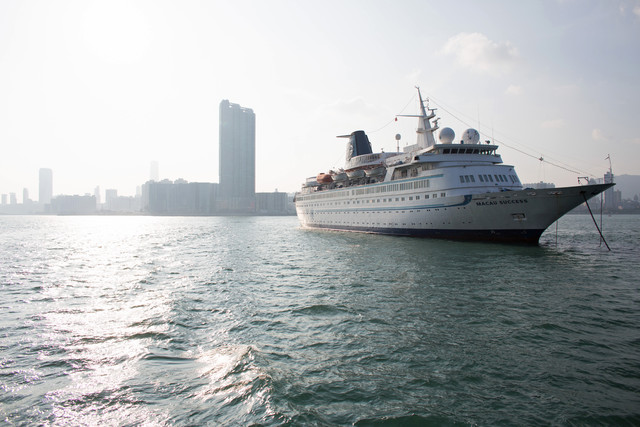 When Li Yu wanted to take a gambling trip, she looked into Macau but found the hotels too expensive. So she booked a room on an overnight casino boat that sailed about an hour from Hong Kong into international waters before opening up its baccarat tables.

“I don’t care about the food or other amenities, my sole purpose is to gamble,” said Li, a housewife from nearby Guangzhou who played into the early hours of the morning with about 70 others in the ship’s cramped casino. “It’s way cheaper than going to Macau.”

Surging demand from mainland China has made Macau the world’s largest gambling hub, pushing hotel prices above those in Las Vegas. Lower costs, less government scrutiny and easier visa requirements are encouraging some China bettors to turn to gambling boats as an alternative to Macau’s glitzy casinos, which drew $38 billion in revenue last year.

Visitors on the eight casino boats that leave Hong Kong each night rose 9 percent to 615,328 in the first half of this year, aiding operators such as Success Universe Group Ltd. (487) and Genting Hong Kong Ltd. (GENHK)

“The cruise ship can be a good substitute for mainland tourists,” said Hoffman Ma, deputy chairman of Success Universe, which doubled profits from its casino ship to HK$2.15 million ($277,000) in the first half of this year.

The ships’ popularity shows how new businesses are profiting as Macau struggles to keep up with accelerating demand. The city, across the Pearl River Delta from Hong Kong, is half the size of Manhattan and drew about 14 million tourists in the first half of this year.

Macau resorts, owned by companies such as Wynn Macau Ltd. (1128) Melco Crown Entertainment Ltd. (MPEL:US), and MGM China Holdings Ltd. (2282), run at close to full capacity. Rooms in Macau averaged $175 a night in July, according to the government, while Bloomberg Industries estimates Vegas rates averaged $108 last year. A room on a Hong Kong casino boat can cost as little as HK$400 ($52).

While Macau is the only place in China where casinos are legal, the ships operate outside government control in international waters.

Casino operators say they’re not worried about the competition. The casino boats offer little in terms of dining and shopping and do a fraction of the business of Macau’s gambling industry.

Their impact “is minimal,” Ambrose So, chief executive officer at Asia’s largest casino operator, SJM Holdings (880) Ltd., said in an interview earlier this month. “The pie is growing bigger and some money overflows there.”

Mainland tourists don’t need a separate visa to board the cruise ships once they are in Hong Kong, an added perk for affluent business people who want to stay under the radar. China’s President Xi Jinping last year launched an austerity and anti-graft campaign, warning that the enrichment of cadres and their families threatened the Communist Party’s grip on power.

“Everyone knows that Macau is closely monitored by the central government,” CLSA Ltd. analyst Richard Huang said in an e-mail.

Nelson Wang, a businessman from the southeastern Chinese city of Wenzhou, said he took an overnight trip on a gambling boat while in Hong Kong because he didn’t have time to travel to Macau and didn’t want to apply for a visa to go there.

“It’s a work trip after all — if I get a separate visa to Macau it looks a bit odd,” Wang said at a Hong Kong pier on a recent Tuesday. With the government on the alert for people gambling too extravagantly, he said, he’d rather be discreet.

He said his trip was organized by a so-called junket firm, which arrange travel and provide credit to wealthy Chinese traveling to Macau. Success Universe, which owns one ship that can accommodate 380 passengers, also leases it to Macau junket operators who help bring tourists on board. Shares of Success Universe, which also has a Macau resort called Ponte 16, are up about 37 percent this year.

Success Universe’s boat and other Hong Kong ships leave port late each evening, open their casinos once in international waters, and allow patrons to gamble through the night. A big benefit is that the boats pay no taxes on their receipts, according to Success Universe, versus the 39 percent gaming levy paid on gross revenue by Macau’s casinos.

Macau’s growth has been beyond “everyone’s wildest expectations,” said Standard Chartered analyst Philip Tulk. Others in the industry have “seen how successful Macau has become and want a share of its mouth-watering casino revenue.”