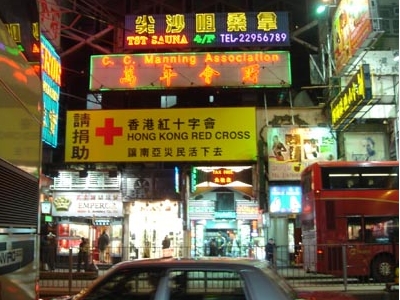 Tucked away above the dazzling storefronts of Cartier and Jaeger-LeCoultre, The People’s Recreation Centre seems completely out of place. The cramped little Mao-themed bookshop has so far managed to hold out, despite finding itself wedged among the world’s most expensive retail space. Burberry, a fellow resident on Russell Street in Hong Kong’s Causeway Bay shopping district, pays around US$1m a month in rent.

But this little outpost of Mao Zedong thought has a trick up its sleeve: it offers politically-sensitive banned books to mainland Chinese tourists, more than 1m of whom will flock to the city this week during the National Day holiday.

For those reliant on the tourist trade, things have never been better. But for the thousands of small businesses across Hong Kong that provide goods and services to the city’s residents, life is getting harder by the day.

Hong Kong’s unique position in the global economy – where Chinese rates of growth meet US monetary policy – has sparked a rapid jump in retail rents, further squeezing a middle class already grappling with the world’s most expensive residential property. Monthly rents in some parts of town have more than trebled since 2008, and are still going up.

Joyce Choi, who runs Chez Meli Melo, a sandwich shop on the edge of the city centre, warns that “greedy landlords” are rapidly destroying the “middle class dream” of owning your own business in the city.

“I’m just feeling frustrated. If the government doesn’t do anything to stop it, I think we’ll have less and less small businesses and family businesses. We’ll just have chain stores,” she says.

Hong Kong’s currency peg to the US dollar, which eliminates the currency risk common in much of Asia, means the Federal Reserve’s quantitative easing policies of the past five years have had an especially powerful impact on the territory.

Since the end of 2008, Hong Kong’s foreign exchange reserves have almost doubled to more than $300bn, according to Daiwa Securities, indicating that tens of billions of dollars have flowed into the territory. That increase in liquidity has coincided with record low interest rates, fuelling a credit boom and a dramatic increase in property prices.

It has also made Hong Kong a more attractive place to shop for those earning in renminbi. The Chinese currency has appreciated by more than 10 per cent against the Hong Kong dollar since 2008, making prices, already cheap thanks to low taxes, even cheaper.

Last year, 35m mainlanders visited Hong Kong, an increase of 24 per cent from the previous year, and up from 8.5m in 2003. HSBC expects this number to top 50m by 2015, helping the city maintain its spot as the most popular destination for travellers from the Middle Kingdom.

This rising tide of visitors – who spend an average of HK$8,500 (US$1,100) per overnight trip – has been a boon for the Hong Kong economy. Retail sales are expected to grow as much as 20 per cent this year, much of that down to fevered demand for watches and jewellery. For every dollar spent in the city, around 30 cents goes on such items, although Chinese tourists are increasingly looking to mid-range clothing and everyday items like baby milk powder.

Retail now makes up around 9 per cent of gross domestic product, up from less than 7 per cent in 2009, according to ANZ.

“The contribution to GDP is huge,” said Raymond Yeung, economist at ANZ. “The macro story will continue to propel this retail theme for years to come.”

But even global brands are now looking for new ways to cope with the rising demands of Hong Kong’s landlords.

US clothing label Ralph Lauren will soon become the latest high-profile name to set up shop on Hollywood Road, the city’s traditional centre for art and antiques. It already has a children’s clothing shop on nearby Gough Street, while J. Crew – a favourite of Michelle Obama, wife of the US president – is said to be the next in line to move in. Though rising fast, rents in the area are still as much as 10, or even 20 times cheaper than on prime shopping streets.

Joe Lin, head of retail at CBRE says tenants renewing contracts in popular parts of town are now having to stump up an extra 30-40 per cent if they wish to stay, forcing many to move elsewhere, or simply shut down. Property analysts say that in a few years’ time, the area is likely to be dominated by international chains, at the expense of local businesses.

For the small shop owners, there are glimmers of hope. The new Chinese government has launched a crackdown on official corruption and lavish spending, which many believe will dent luxury sales. Chinese tourists are also beginning to spread their wings, and increasingly heading to other Asian cities, such as Bangkok, as well as to Europe and the US.

But near-term relief is most likely to come from the Federal Reserve. Economists say a reversal of loose monetary policy in the west – initially via the much anticipated “tapering” of Fed asset purchases – may take the Hong Kong property market off the boil, just as Chinese tourists look elsewhere.

For the noodle shops and antique dealers, it may all come too late.