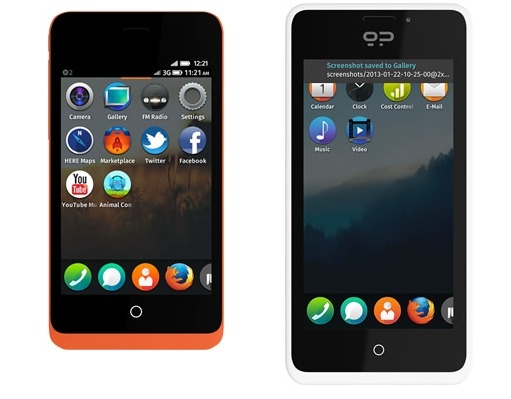 The first devices to run Mozilla’s HTML 5-based Firefox OS have been revealed as the ‘Keon’ and the ‘Peak’, developed in conjunction with Geekphone and Telefonica.

Rather than being full retail models, the handsets are aimed at developers that want to start building and testing apps that use the platform. Mozilla said the first phones will be available to buy in February.

The lower specced of the two devices, the Keon, will come with a Qualcomm Snapdragon S1 1GHz processor, 3.5-inch HVGA touchscreen display, 3-megapixel camera and 4GB of internal storage. It also has the smartphone staples of microSD support, Wi-Fi (N) and GPS. It does not, however, have a forward-facing camera.

The Peak will come with a slightly higher specification that includes a dual-core 1.2GHz Snapdragon S4 processor, 4.3-inch qHD display, 8-megapixel camera on the rear and 4GB of internal storage. It also has a forward-facing 2-megapixel camera and a higher capacity battery, too.

On the other hand, Tizen OS, which is being developed by Intel, still looks more promising. The reason is that Samsung has already announced that it will be releasing Tizen OS cellphones this year and it is working with Intel on Tizen OS’s development.

Some may argue that Firefox OS is appealing because it runs natively on HTML5, which is an open-source platform and Tizen OS is not 100% HTML5.

But Tizen has one large asset behind it: the marketing and technical power of Samsung, which in just a few years took its flagging smartphone business and turned it into a world-beating phenomenon.

“It is up to Samsung to drive adoption and awareness of the Tizen platform,” said Julien Blin, an analyst at Infonetics.