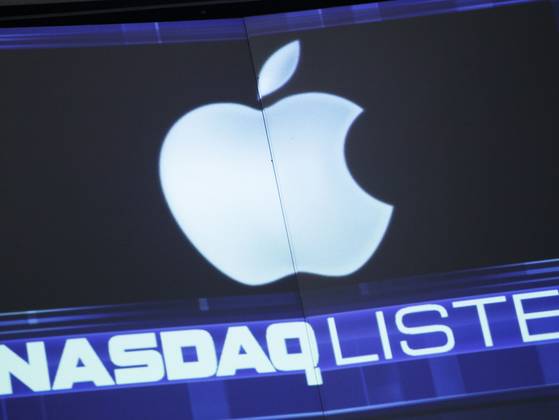 Apple stock closed at $523.90 a share today — that’s down another 1 percent, and rapidly approaching the stock’s lowest price since it began a months-long swoon back in September.

So why is the once-unstoppable favorite suddenly in such a fix?

Yes, Apple is up some 25 percent for the year. But it was only four months ago when the price per share sat at $700.

Based on supply chain checks, we found that competition from Samsung is on the rise, creating problems for the iPhone 5.

In the New York Times, economist Edward Zabitsky suggested that “as Samsung has surpassed Apple as the leading handset maker, apps have become more important than the devices that carry them, and handsets are increasingly being evaluated on their ability to access the cloud and interact with other devices.” Zabitsky, long bearish on Apple, suggested those trends are bad news for Apple’s long-term competitive situation.

More broadly, we view tablet innovation as increasingly difficult, opening room for alternative solutions to iPad and creating risk of further market share loss. Tablets under $300 are driving the majority of incremental demand as compared to six months ago.

In Business Insider, Henry Blodget posited several theories, many of them also suggesting concern that Apple’s long dominance may be waning as the smart phone market evolves and lower-priced — and lower-profit margin — phones take a larger piece of the annual sales.

Apple has reportedly slashed its orders for iPhones for the first quarter of  next year. According to UBS and other sources, Apple cut its “build” orders from 35-40 million units to 25-30 million. This suggests that sales of the all-important iPhone may be far lower than Wall Street has been expecting.

More broadly, Apple has been a monster of a stock for the last decade, and some investors are likely taking the opportunity to lock in these gains while paying today’s low capital-gains tax rates.