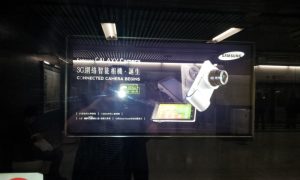 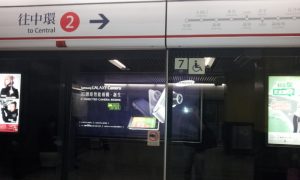 Samsung has started to advertise its new Samsung Galaxy Camera with Android OS at MTR stations.

This is a picture that FutureHandling took at Central station last night.

As an Android device, it’s got pretty much the same guts as a modern Galaxy smartphone. That means a huge 4.8-inch screen, a quad-core processor, a Samsung-ified version of Android 4.1 Jelly Bean, and 4G LTE connectivity. It even has a microphone, intended to be used while taking video, so theoretically you could ditch your phone, make calls with a VoIP service or Google Voice, and use this as your exclusive camera/phone. And of course it has access to the entire Android app store, which has fairly recently been renamed Google Play. But this is not a Galaxy smartphone with an improved camera; this is a high-end Samsung point-and-shoot with Android.

There are a few Samsung-specific Android apps installed that will aid in photo sharing. While most users will likely share photos via Facebook, Flickr, or Twitter—all available for download via the Google Play store.  Device-to-device sharing is also supported via Bluetooth and Wi-Fi Direct, both accessible from the camera application.