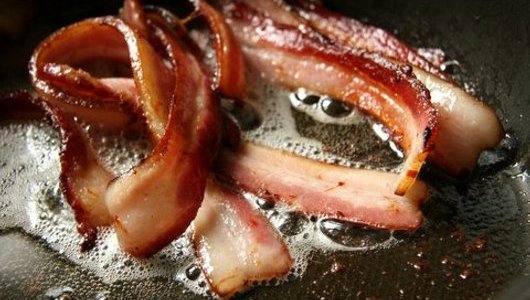 A new technique invented by Dutch scientists, that turns pig stem cells into strips of meat could offer a green alternative to the slaughterhouse and help end hunger.

In an effort to make meat production more efficient, Dutch researchers have developed a way to grow edible meat in the laboratory from the stem cells of pigs. Although the lab-grown strips of meat don’t yet taste or look much like pork (researchers say it has the consistency and feel of scallop), the ramifications for the new technology on the world’s food supply could be significant.
“If we took the stem cells from one pig and multiplied it by a factor of a million, we would need one million fewer pigs to get the same amount of meat,” said Mark Post, a biologist at Maastricht University involved in the project.
Of course, the technology does have its share of critics. Some experts say that consuming lab-made meats could have unforeseen dangers to human health in the long run. Furthermore, there are concerns that such radical plans to reduce our dependency on livestock and farm animals could harm agricultural ecosystems and the economy in rural areas.
Hong Kong imports almost 100% of the meat it consumes. Most of the pork consumed in HK comes from China, Brazil, the U.S., Australia and New Zealand. If lab-produced meat becomes popular, the volume of trading between HK and these countries would substantially fall. Moreoever, most HongKongers are concerned about eating food that has been ‘generated’ in a lab.
Technology could provide food for more people while making the slaughterhouse obsolete. Furthermore, since meat production is such a huge contributor to greenhouse gas emissions worldwide, switching to lab-produced meat could theoretically lower the industry’s impact on global warming by up to 95 percent.
It’s also doubtful that bacon lovers and foodies would ever trade in the real thing for spongy lab meat. Not even the Dutch researchers responsible for growing the meat have been brave enough to try it yet, and they admit it’s probably a long way off from tasting like real pork.