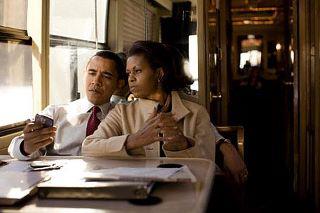 A story that has been circulating on Facebook about a supposed conversation between Michelle Obama and a restaurant owner is likely to be fake.

First, this is the story that has been shared on social networks such as Facebook, Twitter, Weibo and WeChat.

“One night President Obama and his wife Michelle decided to do something out of routine and go for a casual dinner at a restaurant that wasn’t too luxurious. When they were seated, the owner of the restaurant asked the president’s secret service if he could please speak to the First Lady in private. They obliged and Michelle had a conversation with the owner. Following this conversation President Obama asked Michelle, “Why was he so interested in talking to you.” She mentioned that in her teenage years, he had been madly in love with her. President Obama then said, “So if you had married him, you would now be the owner of this lovely restaurant,” to which Michelle responded, “No. If I had married him, he would now be the President.””

FutureHandling has searched for answers. It turned out that this story is likely to be a joke. The same joke used to be told about Bill Clinton and Hillary Clinton previously. Moreover, apparently there is a variation that involves George and Barbara Bush.

The following link illustrates the same story about the Clintons. (the last post was Feb. 4, 2008):

Variations have been circulating for years. The West Wing used it for a story told by President Bartlet about his wife Abby, though in that version it was a ditchdigger and not a restaurant owner. Meanwhile, in one of his books, Obama says that Michelle didn’t push him into politics. In fact, she would have preferred that he got a law firm job rather than run for the Senate.

Bill and Hillary Clinton versions have been noted as far back as 1993. This version was posted online in March 2002:

A telling Hillary Clinton joke has the then-first lady and the president driving along in scenic Arkansas. When they pull over for gas, Clinton notices his wife has jumped out of the car, bounded over to the gas-station attendant, thrown her arms around him, and kissed him with tears of joy. “Who was that?” a bemused Bill asks as they drive away. “Oh,” replies Hillary somewhat wistfully, “he was an old flame I haven’t seen in years.” “Well,” says Slick Willie with a smirk, “I guess if you hadn’t married me, you’d be helping him pump gas now.” “I don’t think so,” says Hillary icily. “If I had married him, he’d be president now.”

President George W. Bush and his wife Laura were driving in the Texas countryside when they came to Midland, where the president stopped for gas. It turned out that the gas station attendant was a former high school boyfriend of Laura Bush’s. Driving away from the gas station George W. turned to his wife and said: “Ain’t that odd Laura? If you had married that guy you would be the wife of a gas station attendant instead of the president’s wife.” “No, George dear. If I had married him he would now be the president of the United states of America”, the First Lady replied.