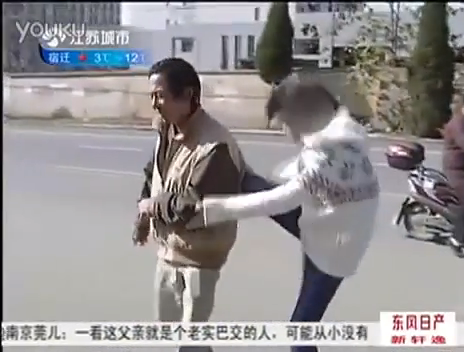 This is a video shown originally on Youku (a video streaming website similar to YouTube) that shows a Chinese teen hitting and kicking her own father who does nothing to stop her.

This is a video that has shocked Hong Kong and is being commented on sites like Facebook and Weibo across the SAR. The link has also being shared over Whatsapp.

The sad story took place in Nanjing, China. The camera shows a 14-year-old teen, whose name is Xiao Jin, slapping and kicking her own dad several times. The dad does not do anything to stop her.

According to the TV show, her parents got divorced when she was still a small child and Xiao Jin has been raised by her grandparents until this year, when her custody was given to her dad. Since then, she has tried to scape from home several times.

Xiao Jin claims that her father often beats and scolds her (and, in the past, her mother) when he gets drunk. Her dad admits that he has hit her before, but only twice — and only because he wanted her to study and not play around with the wrong crowd.