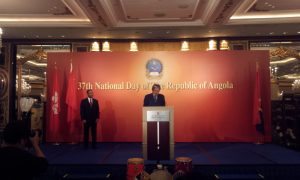 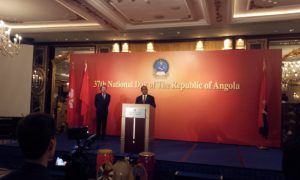 The National Day of Angola is a date to celebrate its independence from Portugal in 1975. Located in Africa’s south central part, Angola is bordered by Congo to the north, by Namibia to the south, by Zambia to the east, and by the Atlantic Ocean to the west. Luanda is the country’s capital and largest city.

The event last night had guests from embassies and consulates of the major countries in Asia including other countries in Africa, such as Nigeria. The HK Financial Secretary, John Tsang, gave a speech together with the consul of Angola in HK, Mr. Cupertino de Jesus Pio do Amaral Gourgel.

Angola is endowed with bountiful natural resources such as diamonds, oil, gold, and copper. Diamonds and oil comprise around 60% of Angola’s economy, both of which represent the largest exports of the country. In 2002, economic growth was impressive. From 2001 to 2010, the country registered the highest annual average Gross Domestic Product growth of around 11.1 percent. In 2006, Angola became a member of the Organization of Petroleum Exporting Countries (OPEC).

The population of Angola, which is around 18.5 million, is multi-ethnic. It is composed of Ovimbundu (37%), Ambundu (25%), Bakongo (13%), and other groups. The official language of the country is Portuguese, owing largely to Portugal’s presence in the country for nearly 400 years.

The country is a member of various regional organizations such as the African Union, the Community of Portuguese Language Countries, the Latin Union and the Southern African Development Community.