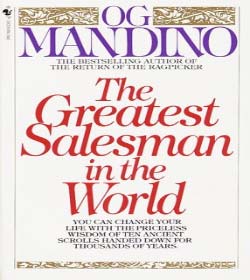 ‘The Greatest Salesman in the World’

To talk about Og Mandino’s book, ‘The Greatest Salesman in the World’ applied to people back in 1968 as it applies to all of us today.  For a world which is now in crisis and turmoil.  It tells the story of a poor camel-boy, Hafid who through hard work and changing of attitude achieves wealth beyond his wildest dreams.

At the time and until today the book has been a constant bestseller.  One of the reasons is for its simplicity and it tells about several unique truths. ‘The Greatest Salesman…’ focuses on positive attitude and changing in behavior to achieve one’s goals.  It was crucial for ‘Hafid’, the main character to change his attitude to a positive one in order to make it and crawl his way out of poverty.  The other thing that book basically expresses between the lines is the following: most people will give up on their dreams.  In this case, the camel-boy, he wouldn’t, couldn’t; therefore, he pushed himself harder to be the best and sell the highest quality items he could.  He never stopped trying!

The reality is and this is the other underlying truth of the book.  Nine in ten people will simply give up on their dreams and live in misery.  Then the same people will complain and blame others (the entire world for that matter) for their own failures; when it was themselves who didn’t stick it out and make their dreams come true.

This book shows not only great flare for salesmanship, but it also gives the reader the tools to become a better person and believe in oneself.  A much greater version of one’s self, indeed.  This is one of the best books ever written by a motivational speaker in the Twentieth Century and after 52-years published, it is still one of the greatest books to enjoy.

For those dealing with depression/sadness and well in need of a morale boost, this book is a must.  When presently, the world is in crisis and the economy is a in a slump with the pandemic, this book is to be read over and over.  What’s the biggest reason to read and practice what’s inside?  To change negative attitudes, which sometimes anchor our lives down in failure.  If the bad habits aren’t changed, such as, being lazy for example, we’ll never make it as successful people.  All the tools are in this book.

Like the character, he never allowed failure to keep him down and he fought back with impetus; with a greater motivation and enthusiasm to succeed.