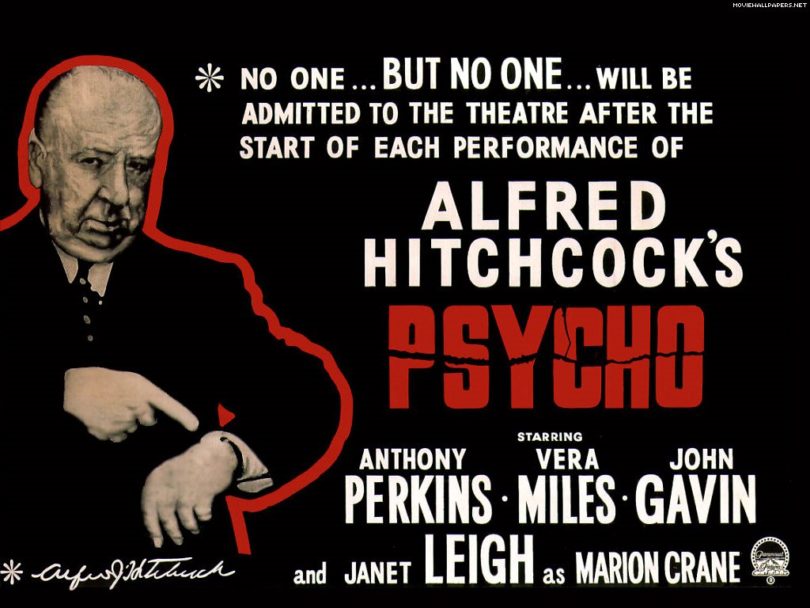 Hitchcock, “Master of Suspense” without an Oscar: What!  You got to be kidding?

The great gentleman who made “Psycho”, tales a tale about a man who has a psychotic break from himself, and becomes a double entity of himself and his overbearing-abusive mother.  Until this day, the opening scene with Janet Leigh still sends chills down anybody’s spin.  A true classic of terror that has engulfed the younger and older generations for decades.  It doesn’t matter if you watched it today, yesterday or 60-years ago.  It is scary as hell, and still leaves people by the edge of their seats in fear.

This is the same Alfred Hitchcock who gave the greats like, “The Birds”. Nobody could leave a movie theater or their living room without feeling traumatized and afraid of crows.  Oh, by the way, as a boy after watching this one–I had to turn on all the lights inside my house!  Ha, ha!  That was how fearful this motion picture left me.  Well, I was 11-years old at the time!

But the scariest of them all in true Hitchcock fashion was the “Rear Widow” (1954). This story is about a ‘peeping tom’, Jeff, a photojournalist who breaks his leg and is convalescing at home.  Jeff, with his binoculars, while ‘spying’ on his neighbors witnesses a man murdering his wife.  This is true Hitchcock at his best and a genius at scaring people ‘half-to-death’, indeed.

If you’re into horror, all of the above are top Hitchcock classics, when he was at his best.  In other words, all of these are a must see!  Other than that, “North by Northwest”.  But start with his three-greatest masterpieces first.

So, why didn’t he ever win an Academy Award?

That’s the mystery which even today has perplexed the Hollywood establishment. And here is the reason why!  Horror wasn’t considered the kind of movie genre that ought to win awards.  It was better to nominate dramatic films or true-life stories like “Spartacus” at the time (1960s) than anything the “Master of Suspense” made. Sadly, Mister Hitchcock never got his proper dues or the chance to win this prestigious award.  This was also the fact that he would ‘thumb-his-nose’ at the elite and didn’t care what they thought of him.  Something which the Academy never forgave and it is still that way with actors/directors who don’t conform until present-day.

In any case, it is important to recognize ‘Hitch’s’ (as he was known in intimate Hollywood circles) contributions to the art of cinematography 60-years later.  Without him, others would not had the opportunity to come out and follow with the “Halloween”, “Friday the 13th”, “Zombie”, “Freddy Kruger” and “Texas Chainsaw Massacre” movie franchises.  Therefore, Hollywood still owes a great depth of gratitude to a man that literally made what the horror genre is all about, scary and fascinating.  Three cheers and five stars for ‘Hitch’!