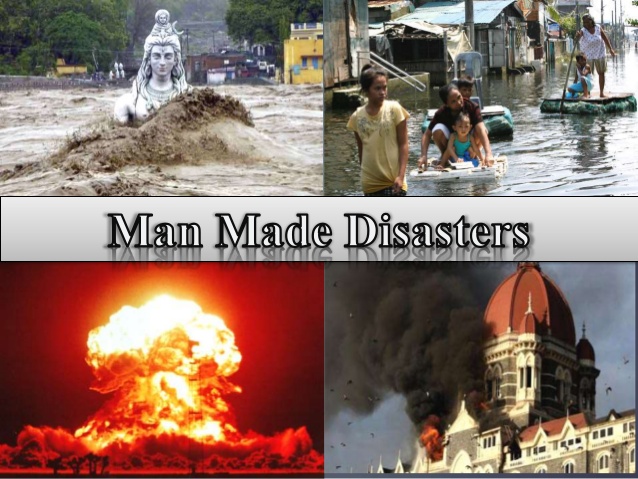 With each passing year, more and more disasters are man-made

It is easy to estimate that 40 percent of the problems in the world are man-made. This is including natural disasters.  Some may ask, “Why?”

The majority of the present-day flooding and storms come from deforestation.  The abuse of our earth has been warning us with these mega or super-storms and fighting back against human beings’ egotistical abuse of natural resources.

This isn’t only a problem in central and southeastern China.  It has also manifested in extreme cases throughout Europe and the U.S.  Major cases of draught in northeastern and the horn of Africa.  Los Angeles (California) is just one of the metropolises that has to fight against lack of water.  Now the issue is switching and quickly spreading to Las Vegas (Nevada) and its lack of the precious liquid.

Notice the amazing and scarily speeds of tornadoes, typhoons and hurricanes as of late.  This is mother nature saying, “Don’t mess with me!” And it’s going against us! Storm speeds become faster and faster with each passing year.

The Florida (U.S.) panhandle is just one example of crazy storms hitting every year and the destructiveness grows and grows in power.  Storms can reach easily a category 5, something unheard of 40-years before.

It is mentioned by scientist, that with the acceleration of global warming, polar bears will become extinct in the next 80-years.  This is a sad truth and when will people learn to stop and listen.  In other words, stop destroying our planet!

This isn’t the only dangerous part affecting our world.  There will be shorter colder-winters and longer hotter-summers.  As the polar-ice caps begin to melt, seas around the world will rise by seven meters by the middle of this Century.  Truth be told, it is the rising waters which are eating up 10 to 20 percent of our coastlines. Cities like Venice (Italy) and Miami (Florida) are simply sinking!  This isn’t only a problem for the latter ones, but major cities, Shanghai and New York (U.S.A.) will suffer the same fate.  Not only coastal cities, but take for example, the capital of the U.K., London.  Each time the Thames floods, London is also at risk of going underwater.  More and more places are affected and the fear is that by the next century our planet will become a literal ‘water-world’.

The tragedy doesn’t stop there.  Deforestation does continue to affect places like the Amazon rainforest (Brazil and nine other countries in South America); which holds 40-percent of the world’s oxygen (O2) levels.  If people continue to slash, burn and cut it down–all we will have to breath is carbon dioxide.  Chocking our lives away and that of the trees!

Therefore, there is an important lesson in all of this.  When cutting trees down, for every one cut there ought to be ten planted to secure our future.

The only way humanity will have a chance in tipping the scales in their favor and coming back from this breaking point is for nations of the world to come together in peace!  These changes need to start now and should be worked on for the next 30-years.

It is all a matter of nations cooperating and honing their skills on using technology with the wind, water and power from the sun.  With these implementations, humanity will have a fighting chance.