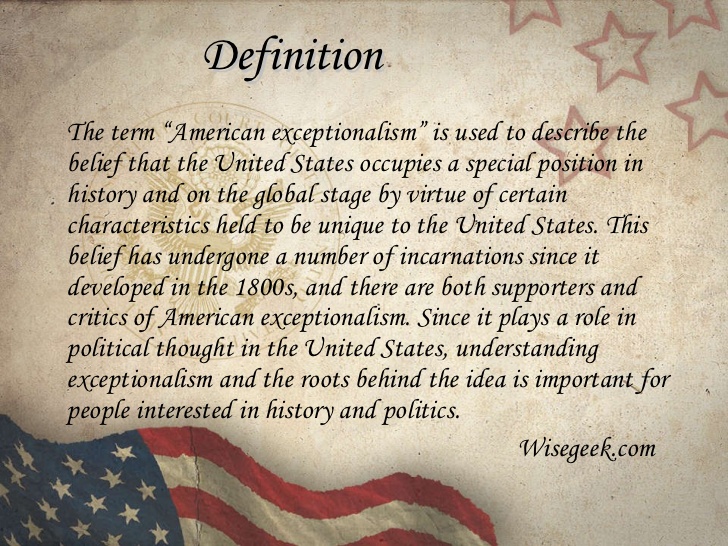 American exceptionalism is clearly over

With the advent of the Twenty-first Century coming to light, it has shown the dawn of American exceptionalism.  Where Americans went where they wanted and could exert power outside of their country in any part of the globe; and without any repercussions.  As what happened once in history with the Roman, Portuguese or British Empires.  This period is clearly over for the United States.

Remembering the times when ‘English only’ was the ‘law of the land’ since the Treaty of Versaille (1919) after World War I.

Now, the up and coming global-power is China and honestly, 20 years before we should have been learning how to speak Chinese and sending more people to China. Instead, arrogantly so, we flaunted and squandered our precious time.  Yes, the U.S. was the economic leader and people from all over the world came to learn from us. This has certainly changed with the advent and growth of the Chinese economy. Where many are looking towards the East for the new found-sources of wealth and answers. Therefore, having to learn a second language, possibly Mandarin-Chinese to able to live inside a country that is growing rapidly with different opportunities.

Where it was at one time, Silicon Valley for the I.T. experts, this has shifted to Shenzhen (the I.T. capital of China) or India.  During the 1980s, it was the splurging markets of Wall Street, New York City that everybody came to reap the wealth from; presently, it is here in Hong Kong and in mega-cities like Beijing or Shanghai.  There was once a land called Hollywood.  This has dramatically changed for Bollywood in the last 15 years.

Ridiculing others at one point in the U.S. for not speaking entirely English. The prejudiced would point the finger and say, “English only, this is America!  Love it or leave it!” And go on imitating in a belligerent laughter the foreign tongue the other person was speaking, with a, “Ya da, ya da, ya da!” or “Blah, blah, blah!”

Funny how the tables have slowly turned since the beginning of the Twenty-first century.  Because even as noted in the Vera Brittain book, ‘The Testament of Youth’: Americans would look down on those who didn’t speak their language in other foreign lands during most of the Twentieth-Century.

Today it is the other way around and there is a group in the United States which feels intimidated by this.  The official language for business is still English; but people have the right to speak in the language of their ancestors and culture.  That is the truth, especially with something such as ‘Freedom of Expression’.  Some Americans have quickly forgotten that a nation of immigrants allows multiculturalism and with this comes a potpourri of polyglot peoples with different languages.

Sad to some will be the day when English is king no more.  This will be part of the reality much sooner than later or in the next 30 years.  So, with that said, we must be ready for this changing rapid-wave in the future.