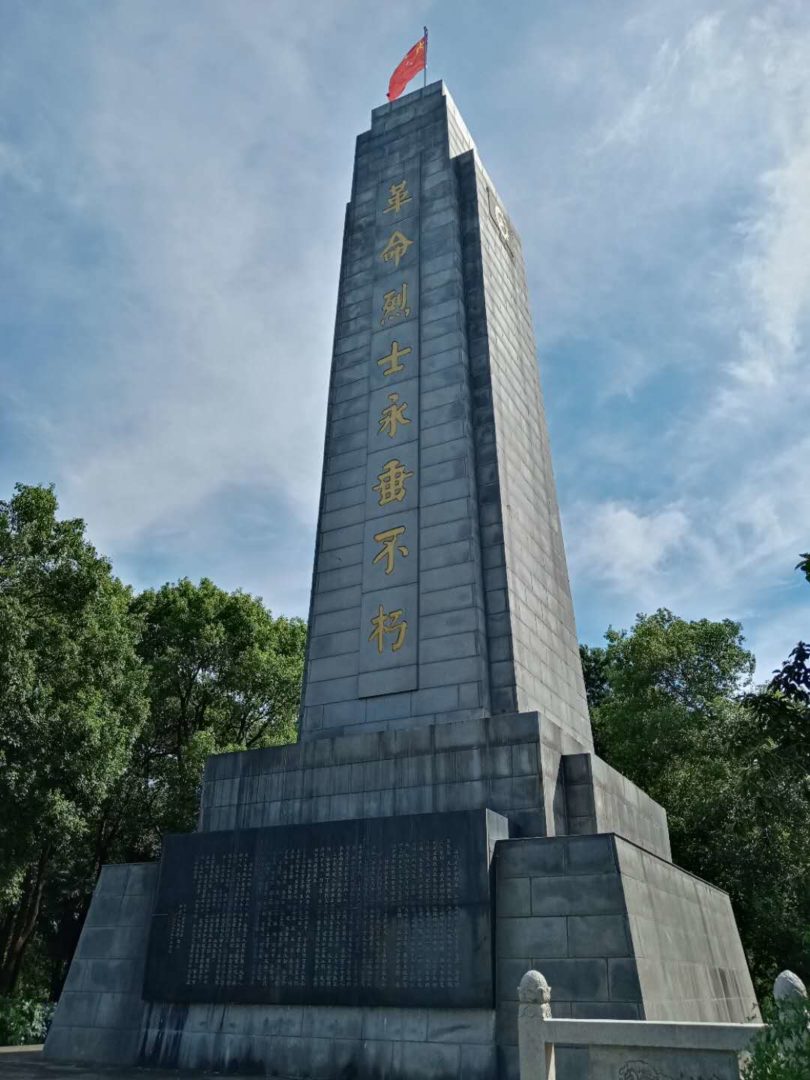 These next couple of weeks and until next month will mark 75-years to the end of World War II and here in China, it’s a moment to remember at the Huarong Martyrs Mausoleum (Hunan) Second Sino-Japanese War. Many youngsters who had barely reached adulthood (between 1937 to 1945) couldn’t live to enjoy the precious years of prosperity because of the War–that now this country so gleefully enjoys!  Presently, many history buffs out there, students, teachers and those who lived through those dark times are doing their reread on Edgar Snow’s, ‘Red Star Over China’.  And throughout Huarong County, Yueyang City in Hunan isn’t the exception.  Students who need to do their summer history-homework will have to do a visit to this small park and write an essay about their experiences.

It was dark times, and this country had been waging war for eight long-years.

What is this park about?

Before entering the grounds, there are posters indicating the Martyrs ground as hallow.  Signs indicate to be quiet and respectful of the grounds.  Other posters of Lei Feng also are there as a remembrance to the country and people’s sacrifice. Inside a country which refuses to forget; and they cannot, since to forget is to repeat past mistakes.  Therefore, horrors like these cannot happen again!

Once inside the park, there is a sudden scream, one must look around in nervous fear. Then it is to realize, it’s the recording of young men screaming their way into battle. There are two paths up this hill/mountain. One is walking around the main road into the park; however, that is more for vehicles.  The other is walking-up the stone-stairs to the right.  This area is lovingly engulfed in green trees and then, once halfway up, there is the view to this monument/memorial to their fallen soldiers in this place of quiet beauty.  The sound of the recording is repeated once again.  In the beginning, it is unnerving; then after several repetitions–any person will become accustomed to it!  The memorial stands tall, with the flag of China at its top saluting/waving.  Some people come here to seriously sit and contemplate.  Others walk around viewing, they try to wonder what it was like or imagine what happened.  Once at the top and around the memorial, the walk is downhill to view the tombs.  The dead were barely in late-adolescence, at least most of them.  Some were really child-soldiers defending their homeland.  But the burial grounds make an impact with its statue in remembrance to the young who gave their lives.

Therefore, this week and throughout next month marks that point for those who gave their young lives in battles across the nation. From those in the People’s Liberation Army, to the Flying Tigers and civilians who died for their country during those years when humanity went absolutely crazy. These experiences are galvanized into the psyche of the people.

What ended World War II on this side of the world?

When two atomic-bombs were dropped on Hiroshima and Nagasaki, and by 9 August, 1945 the Japanese gave their unconditional surrender.  I cannot condone such actions or justify the use of deadly force in killing life and destroying the environment.  What needs to happen is to keep these events fresh in people’s minds, so they don’t happen again!

How to get here, conditions of the park and time needed to cover the grounds?

Take the G107 into Huarong County.  If by car, there is a sign on the main road into Huarong indicating the Huarong Martyrs Mausoleum/Cemetery (华容烈士陵园).  When staying in town, if you are on Huarong Dadao (湖南省岳阳市华容县华容大道东), take bus number 5 for 2 Yuan until you notice the memorial on top of a hill or on Dougang Mountain (陡岗山).  It was built in 1960 and I gave the facility a five out of 10.  The premises are nice in the beginning, but towards the middle and end it looks grungy; in dire need of repairs–broken down.  The grounds are special; however, need to be better kept and specially the tombs.  The Martyrs Mausoleum can be covered in 35 to 40 minutes without any rush.  It is a small area and the entrance is free of charge. Therefore, if travelling from Changsha into Huarong, occupy your time with other historical areas and sites around town.