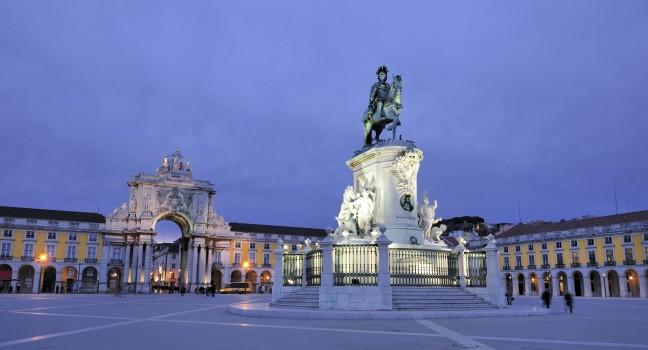 Sitting down to a ‘Fado’ (traditional folk music from Portugal), one couldn’t escape the melancholy of the times, it was like a Moorish lament!  The guitar played smoothly, as the voice cracked with sorrow over a lost time. Maybe, possibly, when Portugal was a maritime empire.  It was a smoke-filled bar with the sounds of yesteryear, as supper was served between bottles of wine from O Porto.  But it wasn’t the light filled or festive gala of O Porto, it was the beauty and grungy beat of its capital, Lisbon.

These are the same memories inspired from the days of old and while visiting Lisbon. A city divided between the old section and after its powerful Eighteenth-century earthquake (1755), that from the ashes of destruction sprang out the new section to this marvelous city!  A city in beauty, decadent in bars; however, it is not the decadence one might think. Lisbon’s bar scene is more to sit and listen to the jazzy-tunes in Portuguese, through its string of establishments.

Lisbon is a city to return not once, but twice!

Since it is held to a higher standard of decor, even when people sit down to have a cafe (coffee) or enjoy a ‘Bacalhau a Algarvia’ (codfish with potatoes).

Other than the most recognized football-star in the world, Ronaldo, Portugal is simply gorgeous.  And it is one of the most underrated countries in the whole of Europe.  With a history spanning since the Roman Empire, Visigoths and Moors.

Here’s a quick intro into Lisbon, just to get any traveller inspired for a visit and ‘juices flowing’.

Starting with Sao Jorge Castle, it was one of the points in this hilly city where the Moors where kicked out of the capital and the Portuguese began to establish its culture.  Not only did its people established their influence locally, but across Europe.

Praca de Comercio (The Plaza of Commerce) is the heartbeat of the city; its soul and center.  Where the 1755 earthquake took place and here the royal palace (Ajuda National Palace) was built after to rejoice in its prosperous future.

Belem Tower is one of the points to fall in love with when visiting Lisbon. Between its turquoise-coastal waters, the tower just shines as an old-defender to the city and later it was converted into a customs and lighthouse building.

What Eiffel Tower is to Paris, Tram 28 is to the city of Lisbon.  It is a good way to tour the city with its long and winding streets.  Beautiful in essence, with the romance of the night.  Tram 28 holds to something restful, a way to delight superbly; while taking in the city and to avoid all that tiresome-uphill walking.

Later, there is the Monument to the Discoveries; whether people like it or not. Portugal was Naval Empire until 1999 (when Macao was returned back to Mainland China).  In this politically correct era, yes, empires were abusive to those who they conquered and at the same time, Portuguese is the fifth most spoken language worldwide.  In the context of history there is a lesson to be learned and remembered, to not repeat past abuses and mistakes.

Finally, the best treat is the Jeronimos Monastery.  It is Gothic and Moorish architecture, it is a must visit for the senses.

Please enjoy Lisbon, because it is one to forever indulge and bask in!