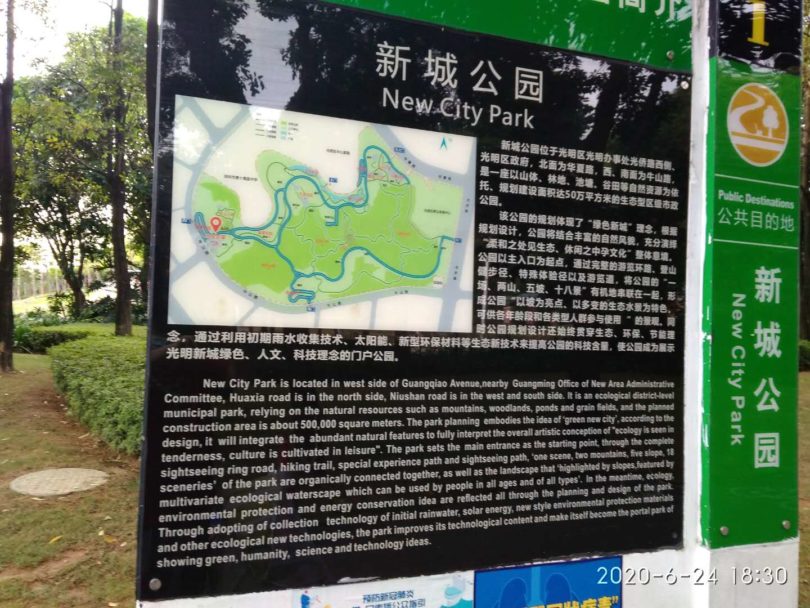 (Guangming District, Shenzhen, 18 July, 2020) – At one of the isolated districts in Shenzhen, Guangming holds a unique little park with nature and a lovely forest to enthrall in.  The New City Park holds over 5 kilometres of different walk paths through, across and around the area’s encirclement.

Up and down, the rolling hills of green forest collide with the trees and bird sanctuary for birdwatchers during the day.  The playgrounds are full for families to enjoy the lazy weekends.  Some people come to picnic and throw frisbees (飞盘) with their kids or walk pets; while most come to walk, run and bicycle the premises with the sweet sound of Chinese music and peace for all those who come to bask in it.  It is a place indeed for exercise lovers!

As Li Xiao Qin (a frequent visitor to the Park) expressed the differences between mornings and evenings, “New City Park has a total different scenery during the day and night.  I prefer to go for a walk with my family in the evenings.  Walking on the tree-lined path, fireflies twinkle around you, like stars, as if I’m back to the good-old days of my childhood.”

The Park is small, but large enough for those who want to build their stamina on its hilly sides.

The main entrances are on the east and south gates.  Holding sometimes to family oriented activities and mini-marathons throughout the seasons of the year.

The Park is good enough to explore in over 6,500 steps (estimated) and it’s one of the best ways to develop an excellent-body shape.

Xincheng has frequent ‘pit-stops’ for those who need to use the W.C. Further, it has smaller parks for families to exercise in.  When walking, there is an part that holds on one of its hilly sides two swimming pools: one for kiddies and another in an Olympic size.  The bottom portions of the Park hold to tennis and basketball courts; with an expo area, hall for table tennis and a bookstore.

The Park itself doesn’t sell or have any refreshments, except for the bookstore.  It is recommended that the park goer carry their own water and snacks with them.

The Park has parts that hold to nature trails and others made of asphalt. These are all comfortable enough to walk and enjoy on a beautiful-brisk day.

What is often recommended is to visit Xincheng a couple of times to get a feel for it.  Opened seven-days-a-week between 0600 to 2200 hours.  Once that feeling is established, the New City Park can be for all those who live in the District or along it. Another good thing to do is separate between an hour to 90 minutes to better explore the Park.  When that is done, it’s easier to learn more about its beauty.

Bus to get the visitor to Xincheng Park is: B963.  There is also metro line 6 opening-up in August, 2020 and walking from the train station isn’t too far to the Park or taking a bus for that matter.  If you get lost, just ask for ‘Xincheng’ on ‘Niushan Road/Lu’ (牛山路).  Whatever is a person’s motivation, it just isn’t another park to enjoy, but one that is closer to nature and part of the lovely District of Guangming in the city of Shenzhen.