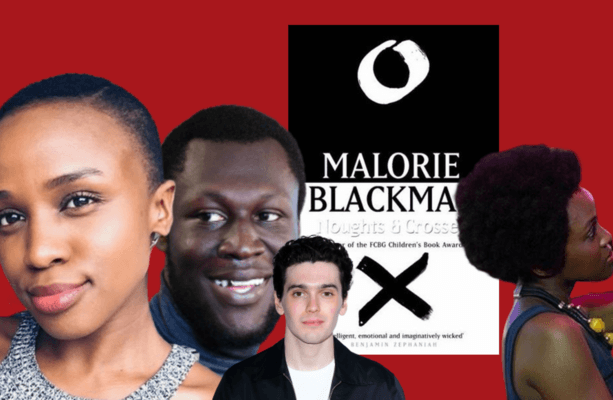 ‘Noughts + Crosses’ is a series offering what could have been an alternate history if Africa (called Aprica in the television show) would have had the technological advances to go forth, enslave and conquer Europe.

This first season takes place in a dystopia called, Albion (United Kingdom) and how the noughts or white population are suppressed-abused by the crosses or the black-upper classes.

The show in a genius way demonstrates a different point of view or what could have happened if Africans would have conquered Britain.  Using parts of history which happened in the U.S. (Jim Crow laws between 1865 to 1965, presently with the illegal ‘stop and searches’ and killings of African-Americans), the Apartheid period in South Africa, how a minority controlled-ruled a nation’s majority, murder of Stephen Biko, de Klerk timeline for changes, the racism which stammered throughout Great Britain’s own history with its segregationist views-laws, liberation of blacks, 1980s racial riots in London and so forth.  These points are all represented in an inverse manner in the series.

The writer of the novel uses inversely-racist words: applying to the white citizens the term ‘blanker’ and a biracial person is identified as ‘halfer’. Using magically the English and African vocab to apply into this drama.

Taking all these elements and switching them around.  It shows the two-main characters falling in love.  Callum McGregor who is a nought and how he falls in love with Sephy Hadley (a cross).  This drama takes the viewer for an emotional-roller coaster of a ride.  Because one wonders if this ‘Romeo & Juliet’ like story has a chance.  Will their love actually conquer all and survive?

There is fear on both side of the spectrum, because Albion is going through political and social changes.  This civil unrest begins to affect all those around.  The story with twist and turns continues, as Callum’s life spirals out of control and he leaves the Military Academy–because his friend Danny is killed by the police.  This turmoil goes further when Callum’s father is killed in prison by the system for acts of terrorism.  However, it wasn’t Ryan who committed these acts, it was his eldest son, Jude.  As the McGregor family lives unravel, the brothers end up joining the terrorist group LM (Liberation Militia).

The novel ‘Noughts + Crosses’ (author, Malorie Blackman) was originally published in 2001.  This is an example well portrayed (specially in the series) when people are: repressed, kept in poverty, with little opportunities for advancement or education, tortured and killed over their ethnic and political make-up.  The divide isn’t only about race, it’s about how countries with technological superiority have always conquered others with less advances through history.  How minorities behave when they have power, such as the historical cases in Liberia and South Africa.  Or how a majority behaves with racist and stereotypical views for generations in places like: the U.K. or U.S.

This T.V. programme has the viewer asking themselves the deeper question: ‘How would I behave if I was placed in this situation?  Would I become racist or believe in equality?’

The truth is, hate breeds more hate.  Without love there is nothing.  Great men like: Mahatma Gandhi, Nelson Mandela and Martin Luther King, Jr. taught this all too well in their respective philosophies and how they lived their lives.

Touche and well done with the show.  A good lesson in tolerance and how to stop racial divides.  I gave this t.v. show three stars out of five.  A little-overly dramatic at times or somewhat Shakespearean, but the programme hits a chord with audiences and leaves giving them a sense of hope in humanity.  In other words, there is potential in this BBC series.