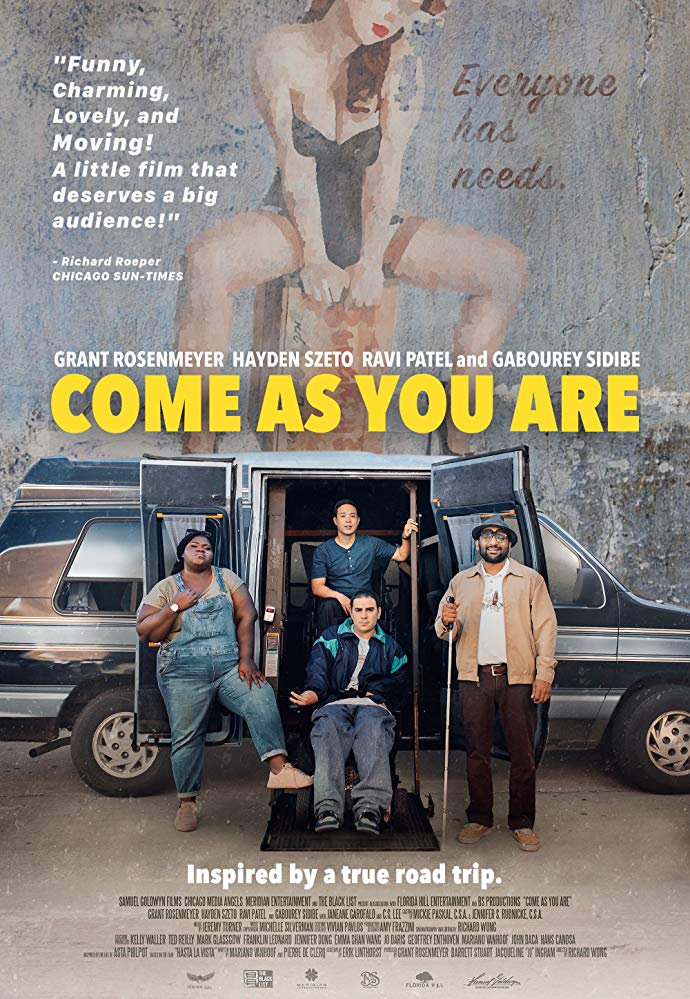 This film stands out in the following way.  It brings three gentlemen who have physical limitations together.  One was born with Spina Bifida (Scotty, portrayed by Grant Rosenmeyer), the other is legally blind (Mo, done by Ravi Patel) and another is a paraplegic who is dying (Matt, actor Hayden Szeto).  Starts off almost showing itself like a tearjerker or tragedy.  When it suddenly doesn’t.  With biting wit and humour, the main character Scotty has an embarrassing erection in front of his mother, but can’t do anything about it.  Scotty is completely wheelchair bound and can’t control himself physically!  Therefore, he needs the constant care of his mother.

These three gentlemen meet up at their physical-therapy center, hatch a plan to do a road trip and travel to a brothel in Montreal.  But first they have to escape from the jealous and overprotective eyes of their parents.

The point of this trip is to assert their independence and as the typical-grown men want to lose their virginity.  Because of their disabilities, people treat them more like things and not like human-sexual beings, sadly.  These men are just behaving like any normal young men who want to get laid.

On this road trip they bring an unstable nurse with a problematic past and attitude (Sam, who was done by the talented Gabourey Sibide), who will drive them all the way into Canada.

In the process of trying to get to the brothel, which caters to people with special needs, they run into a couple of hiccups.  But in a humorous way manage to overcome their disabilities and help each other out as a team.

When Scotty and Matt’s parents come desperately looking for them at the hotel they are staying.  They make an abrupt escape and have to use Mo as the getaway driver. Since Sam had a diabetes attack and was taken to the hospital.  Well, Mo being legally blind drives the van away thanks to the guidance of Matt.  However, later the van will end up in a ditch!

When Sam is released from the hospital, she rejoins the crew to take them to Montreal.  In the process, Mo will begin to fall in love with Sam.

The doubtful parents allow the young men to go to Montreal.  Once on the road, Sam, Scotty, Matt and Mo will develop a special bond.  When they reach the brothel, Scotty and Matt will share in this unique first-time sexual experience.  But in a turn of events, Mo doesn’t want to join his mates, because he wants to share his first time with Sam.

After a lovely evening, Scotty promises Matt to rap him a eulogy when his friend passes away.  Then, and just like that, Matt passes away after a fun-filled night.

At the funeral, Scotty keeps his promise and does a rap eulogy for Matt.

By the culmination on the film, Sam and Mo will end up together.  And with Scotty, he will be asking the receptionist (Sarah, portrayed by Delaney Feener) at the therapy center out on a date.

This film in my opinion faces in a lovely way a dilemma not often tackled by society.  It is the issue of people with disabilities.  More often than not, the general public treats them with pity and as those who aren’t existent. This film shows to the contrary.  It focuses on the problem beautifully.  The main point is that these three-young men are as normal as any other person (except for their disabilities) and have more heart than most people out in the real world.

I gave this film three-and-a-half stars out of five.  With great potential to become a runaway success in the English-speaking world if given the same chance as the original Belgian version of ‘Hasta la vista’; which was genius in its conception.

This motion picture showed as in ‘Four Weddings and a Funeral’ or ‘Death at Funeral’ how with humour death can be tackled and dealt with.  The same is true with the problems of disability.  The flick ‘Come as you are’ didn’t have to be tragic.  It exposed the issue in a funny way and furthermore, it created consciousness for all to understand that at the end of the day–we are all human beings who want to be loved.  Truly magical, surprising and delightful!  Enjoyed, well done indeed!