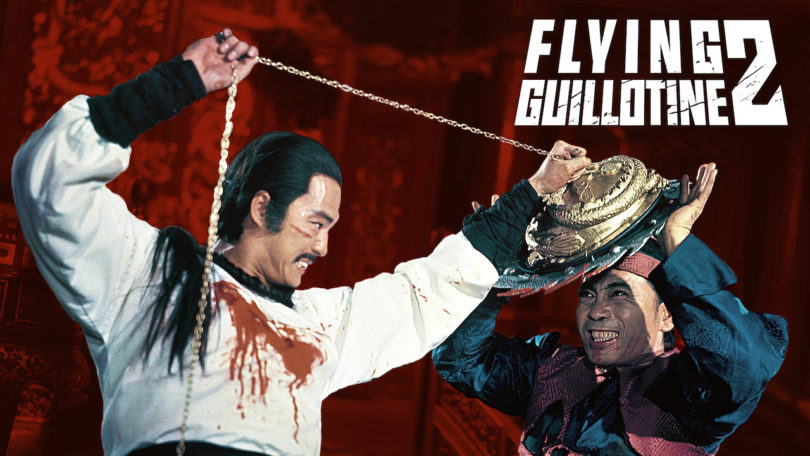 This multi-layered story begins when a rebel tries to kill the Emperor during the first scene.  There is a purpose behind the assassination attempt. This takes place during a tyrannical time, when the Qing ruled China and he [the Emperor] didn’t win himself any favours by mistreating the majority of the Han population badly.  On top of the Emperor’s abuses, he uses a secret weapon to behead his enemies.  This flying guillotine is killing the rebels faster than they can count.  But in this secondary-theatrical version, there is a new weapon invented by a rebel to counterattack the guillotine.  This umbrella like device stops the guillotine and throws it back at the enemy.

With each assassination attempt against him, the Emperor grows more desperate and despotic to control the Han rebels.  In his cruelty, he decides to order the creation of another weapon to counterattack Ma Teng’s iron umbrella, which is destroying the original-flying guillotine.  On behest of the Emperor, a better, more improved double-guillotine is created to kill off and destroy the rebel leaders.

The Han rebels need to infiltrate the Manchu court; however, with every attempt and failure on the Emperor’s life, security becomes tighter and tighter.  Ma Teng’s family is captured and killed in the process.  This rebel leader escapes and swears revenge on the Emperor.  But not before he tries to better his iron umbrella against future attacks.  After a second attempt against the Emperor fails, Nan Lan, a noble-young lady whose father is part of the Imperial Court is also a secret-rebel fighter and she becomes part of the main story.  She infiltrates the Qing Emperor’s court with her special-female group of skilled fighters.  To prove her loyalty before the Emperor, she must kill her own father.  She uses poison to kill her dad.  Yung Cheng [the Emperor] is so impressed, he places her as leader of his army; but this megalomaniac doesn’t trust her fully and orders top officers to keep an eye of her just in case she’s treasonous.

The film shows one thing, against all odds, with good minds people can be extremely creative and ingenious.  There is evil in the world, but also great individuals who come to fight injustice.  This is demonstrated in the final scene, as the hero-rebels fight and all lose their lives to kill the Emperor.

This movie has a great beginning, middle and end.  But sadly it was too short (my biggest criticism); this flick kept me begging for more.  However, it is important to understand a little about the history of China. Furthermore, it is important to comprehend that the flying guillotine as a weapon did exist and there were certain experts who knew how to wield it to near perfection.  The guillotine was used as a stealth weapon of secrecy in China and it was more to catch people, specially guards by surprise.  This motion picture was released in Hong Kong (1978).  This masterpiece runs for an 1 hour and 18 minutes.  I’d wish it had been longer.  Other than the fighting scenes, the drama played out rather well.  Therefore, I gave it a rating of 8 out of 10.

This is entirely a Shaw Brothers production.