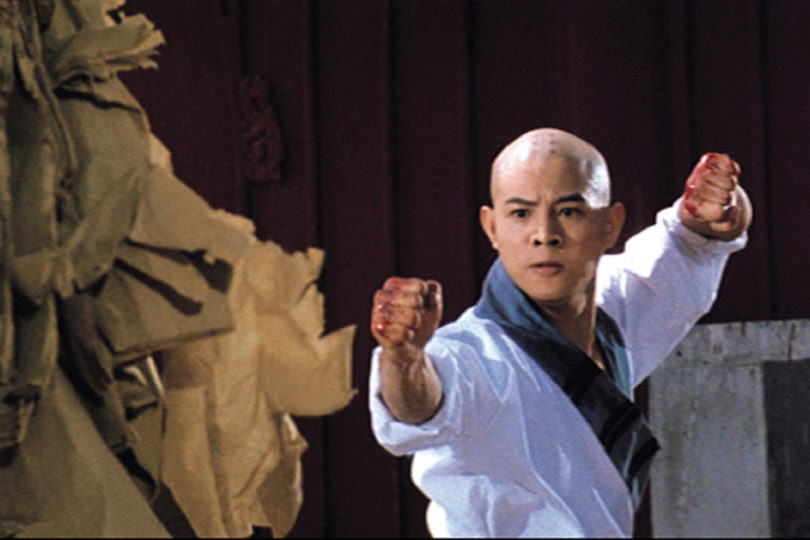 ‘The Martial Arts of Shaolin’

‘The Martial Arts of Shaolin’ is one production of the Shaw Brothers which takes a different turn than the typical or average martial arts flicks.  First, by 1986 already China was opening up to the rest of the world.  Further, instead of Hong Kong, the entire production was filmed in Mainland China. Showcasing the actual historical sites of: the Forbidden City (Beijing), Great Wall (Badaling Side, Beijing) and Shaolin Temple (Dengfeng, Henan).  The beginning scenes are idyllic and focuses on the Shaolin style training entirely.  This is the superb part which takes the reviewer for a ride, a real treat for the first 26-minutes of the film.

Jet Li as the young monk Lin Zhi-ming who runs away from the Shaolin Temple to kill Lord He Suo; Huang Qiuyan as Si-ma Yan – a warrior mysteriously connected to Lin Zhi-ming since birth and doesn’t know it; Hu Jiangqiang is Chao Wei – another warrior-assassin who in the end will become Yan’s husband; and Yu Chenghui is the abuse ruler Lord He Suo.

Lord He Suo is an abuse leader who through his control abuses the population at hand.  When a young rebellious-warrior monk comes into the picture and decides to skip training in his desire to assassinate Lord He Suo. This young monk is Lin Zhi-ming and he needs to find a way to hide himself with a dagger to kill the leader of his territory.  The way he plans it is by wearing a performance-dragon costume for the exhibition which will be given to this abusive ruler.  Lin Zhi-ming wears a silver-ankle bracelet since birth.  Here the story intertwines with Si-ma Yan, a female assassin who also wants to kill Lord He Suo; she also wears an ankle bracelet since birth and understands when she finds her better half, they will marry.  But as the plot thickens, Chao Wei is another assassin who is deeply in love and very protective of Si-ma Yan.

The action of the movie takes place in the last 67-minutes of the flick.  The first 26-minutes demonstrates what Shaolin is all about and that it stands for justice.  The two best parts of the film are when there is an exhibition for the ruler, it shows the artistic beauty of the acrobatics and Kung Fu in gorgeous momentum.  The other is when Lin Zhi-ming is handling the sheep to hide the two-young assassins (Si-ma Yan and Chao Wei); therefore, creatively passing through the checkpoint where the guards are looking for them after the failed attempt on Lord He Suo’s life. The action takes the viewer through three distinct historical sites in China.

Towards the end, the last fight scene is superb, as they fight it out through a garden of vines.  Demonstrating one of the Shifu’s (Teacher) secret Kung-Fu, while fighting with the snake technique.  Also in the finally, Lin Zhi-ming understands that he was meant-born to be a monk and wants to finish his training at the monastery. Therefore, he hands over his silver-ankle bracelet to Chao Wei and gives-up on his love for Si-ma Yan.

The film certainly passes into the category of a masterpiece.  The parts when the Shaolin Kung-Fu training are shown, these techniques are just magical in essence. Because as for most Kung-Fu, training is a lifetime of practice.  The beginning scenes added to the parts of the assassination attempt and walking the sheep are demonstrated in a genius way.  The scenery looks crisp and clear.  The only thing I would criticize is how the movie jumped from the Shaolin Temple to the sudden desire of the monk (Lin Zhi-ming) to assassinate Lord He Suo; there is no transitional or explanatory scene.  For this reason, I took one point from this classic.  Therefore, I gave this motion picture a 9 out of 10.  Another thing, this flick was produced in 1986 by the Shaw Brothers in Hong Kong; however, the filming was entirely in Mainland China.  Signifying a change in times.  Its running time is approximately 1 hour and 33 minutes.