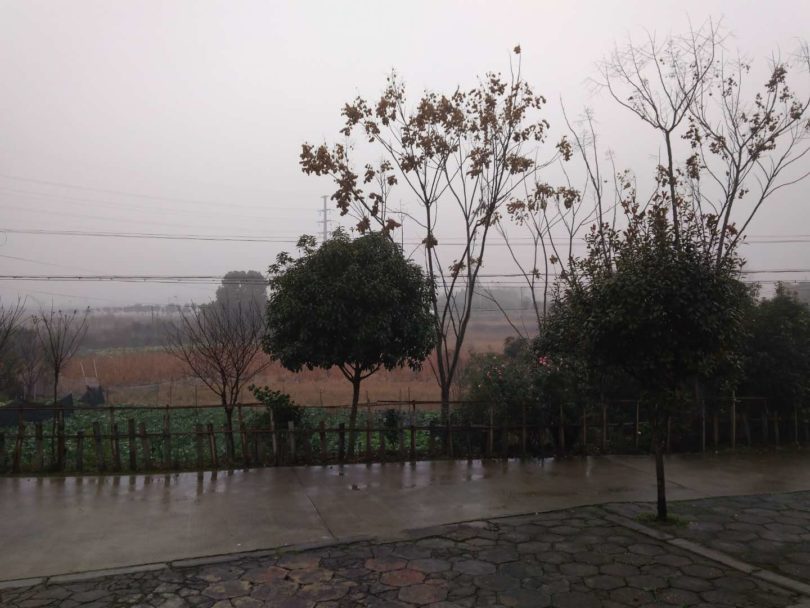 Up in the countryside and my culture shock with Huarong, Hunan

Yes, I am a foreigner, not the typical laowai (老外, old foreigner), but one who socially tries to adapt to the circumstances thrown at him.  After being abroad in China, I thought, this is a snap!  Coming from immigrant parents…  Easy!  I am going to the far-off countryside of Hunan.  I dealt with the countryside before in other parts of the world, nothing to it.  A place of beauty, where you can hear the roaster’s calling in the early-morning hours. Something which can only be described as idyllic.  Then, I arrived to the reality and had to learn a whole new set of circumstances.  The rules of the game were changed on me!

Certainly, there was love in my eyes for my two Hunanese princesses. However, when I arrived after my daughter Mia’s birth–well she was going on a whole two-weeks old and my wife Xiao qin was recuperating after 20-hours of gut wrenching-labour pains.  I thought, “Ha, walking into paradise! I arrived for the best part, home free.” Till it was not…

I held my daughter in my arms and with happy-tears of joy thought I was in heaven. And in a way, definitely, I was!  Till I had to start dealing with the cold of Hunan and freezing my buttocks-off.  It was laborious to even venture either to the toilet or kitchen.  Felt the freezing of my hands or feet in the process.  Barely feeling my legs at times and walking around the house like a literal-stuffed ‘sausage’, with more than three layers of clothing.  Afraid at times, I was becoming a human-Klondike bar.

The first night I slept with my daughter.  It was glorious, at least for the first-two hours.  Then she started to cry and I awoke in desperation every hour on the hour! You see, I love my beautiful round-fat girl.  But oh, this girl can really put them down!  She ate, slept and poo!  Or slept, ate and poo!  Till it was the other way around: poo, ate and slept.  Setting diaper-change records at eight-a-day!  Is there a world-record for such a thing? This little thing was like a void, one would throw food at her, she kept on going and going: like an ‘Ever-ready Battery’, eating and eating and eating! Golly, when would she stop!

After, it was my first experience taking a shower, removed my three layers of clothing and thought, as I froze my buns off in desperation, “What did I get myself into?”

I tried to shave the day after and the razor blade felt like sandpaper on my skin.  I tried to use hot water as much as could, but it was to no use. Frustrated, I thought, could this get any worse.  Thinking it couldn’t, it did!

Alas, when I had to venture to the toilet–part which I dreaded the most. You see, I am a street kid who grew-up in New York City.  Use to conventional-westernized toilets.  Even as things got modernized back in the States, we even had ass-warmers for the seat.  Here, well, I had to make it and improvise.  I crouched down, afraid to fall into this ‘dark void’ and holding on to objects in front of me, thought, “Bombs away!” As I tried to do my defecation or as I call it, number 2, I didn’t aim properly and missed the hole!  Well, you can imagine the rest of my horror story!  All over the floor and wall, as I had to clean-up my own mess.  Let’s leave it at that to not get anymore disgusting.

Feeling like Chevy Chase in ‘National Lampoons’, with the song playing in the background, “Holiday Road”.

Then the women of the house had to well, you know, ‘order me to wash’.  I was afraid of venturing into the shower head once again (yep, this was my ‘boogieman’), that night it was only to wash my face and feet.  Simple enough, right?  There was nothing simple about this one.

The shaving process began and my stomach started to grumble once again. My worse fear was coming true and taking a-hold-of-me; something which I avoided with a passion, the toilet!  I went in and 20-minutes later came out. But this time things were smoother.  Almost home free, I did try to wash my feet, till I nearly broke my mother-in-law’s little seat!  I left the bathroom ‘dazed and confused’, but prouder of myself.

For every difficult moment, I was showered 10-times over with love and extreme kindness from my spouse’s family.  The way my brother-in-law took us to and fro, whether it was to pick me up and take me to Huarong or for Mia’s hospital visit, I am truly grateful.  The way my sister-in-law took time from her business to come and fetch me, even when she knew she would get carsick and she still did it; all out of love.  Specially the way my mother-in-law showered Xiao qin, Mia and I with care. There are no words to describe these moments.  Mama Li (Xiao qin’s mom), as I call her went above and beyond, even going as far to give Mia a special present (a red envelope).  She didn’t stop there, as she saw me suffering with the cold: she bought for me a pair of warm slippers and winter-coat.  For this, I’m deeply touched!

Yeah, I am a New York City street kid.  However, I had never experienced such devotion from people towards me and for all my misadventures: Mia’s crying, the cold, language barrier (to my 40% Putonghua versus my 0% Hunan language), toilet, bathroom or shower-head were well worth it! Because I learned one valuable lesson, it isn’t how much you got, it is how much you give with love!