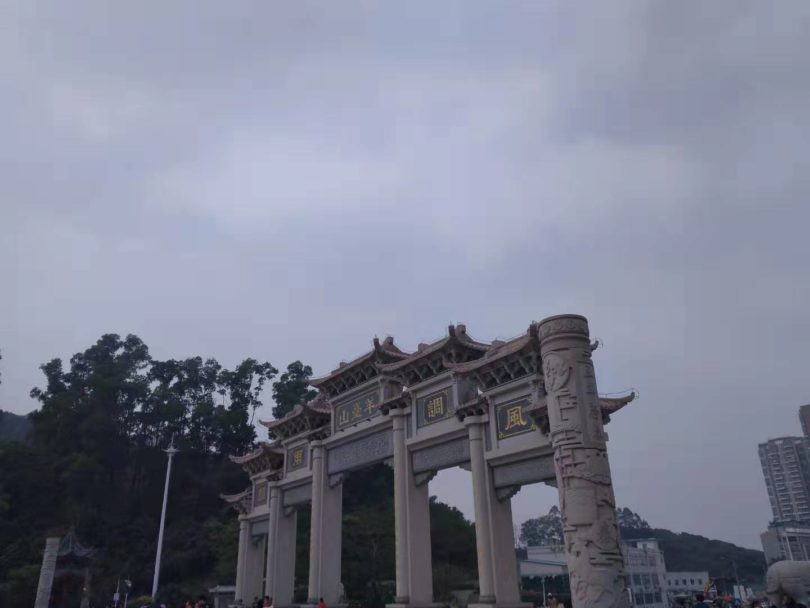 The formidable but not impossible, Yangtai Mountain

Yangtai Mountain, Bao’an District, Shenzhen, China (22 December, 2019) – A formidable invitation, then I knew eventually the challenge would come.  It was unavoidable.  I wanted it, but didn’t want it!  Ha, ha…  But as Chinese-Winter Solstice appeared to come over the horizon and loom over the city, so did the experience at Yangtai Mountain (羊台山; Yangtaishan).  As Chen and I loomed into the Bao’an District area of Shenzhen around 8 that morning, we knew the inevitable was coming.  A steep 3 kilometre trek upward for the next 90 minutes.  This historical mountain was a well known piece of land fought over during the Second Sino Japanese War.  Looking at steps which intimidated the most seasoned hiker, these would be 587.3 metres up to something that was painful for the legs and spirit.

The route began, it was the madness to do this during the early morning. Nonetheless, it had to be done.  This moment was pure, a way to the ‘nirvana’; however, wait!  Who the heck am I kidding?  This was tough ground to cover and before the invitation was given to me, I wished I would have said, ‘No!’ But I had to say ‘yes!’ to prove a point.

Experiences like these are once in a lifetime, something which is purer and sweet with age.  The climb went upward, always and in an approximate 45-degree angle at every turn.  OMG!  There were 10 pit-stops one had to cover to make it to the top.

What seemed like forever!  The walking continued.  That which was fun and energetic at the same time.  I was huffing and puffing through the experience, as beads of sweat came down my shirt; till the entire fabric was totally wet!

We did the trek, Chen and I with a vivacious 9-year old girl, Aliesa.  She was sometimes too tired to continue and in other instances trying to race to the top.

I have to admit, what saved my leg from the stress of climbing that day were the tramping poles he brought for my assistance.  Another thing which never occurred to me was to bring a bottle of water.  My senses were warped because of my lack of hiking in a long time.  I had not done one of these in five years and to my amazement, and beyond everything–I felt better than ever.

Pride continuously surged, swelled in me, as the trembling down of my legs did continue.  There were moments to stop and rest, but never for too long. Cold is the worst thing for bones when hiking!

Gave some pit-stops parts a three to five-minute rest and desperately continued.

Then, as I saw other hikers huffing and puffing, I knew I just might make it. Thinking my legs would give out at any moment, but my two faithful companions never gave out!  Then it came, after dozens of twists and turns upward.  We had happily made it.

What did I take from my experience at the mountain?  The trek should be done once, twice or on a yearly basis while staying in Shenzhen.  Well worth the experience, had a lot of fun and met a lot of friendly people who truly impressed me.  Some were coming and going.

When we made it to the top, I was happy to say, ‘I’ve made it!’ My arms went upward in a ‘V’ for victory surge.

After hanging out for a couple of minutes at the cusp.  We went down the Mountain with fire in our hearts!  The happy ‘conquerors’ of the day.  By the time, Alicia’s mom had met us at the top and going down was way easier.

The total trek took about three hours and covered 6 kilometres.

What advice can I dispense or give about Yangtai Mountain?  Best time to do it is before the sun comes up and early in the morning.  Carry at least two bottles of water.  For protection of the legs, ankles and knees–try to use trekking poles, a cane or stick.

On the negative…  One area of criticism I would state is, the quantity of rubbish. Too much of it, as a matter of fact.  Takes something that is uniquely beautiful and makes it ugly, when some of this is spread on the ground and trees.  Suggestion for the park officials, more rubbish bins on the path–so people won’t throw it all over the premises.

With that said, I hope you give this mountain and outing a chance.  One unique experience, well worth once, twice or every year indeed.  Do enjoy, take care and be safe!