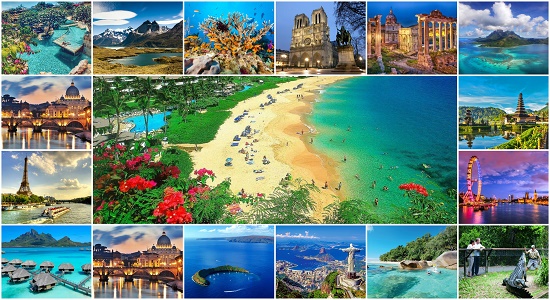 Thirty-one years of travel experiences can teach any person a lot.  Whether it’s to work, travel or play.  What is the best when travelling?  What can be left in to see and view in the gamma of travel experiences?  What’s more important, what to include and what to leave out?  Take for example, while visiting Spain, I would leave in Barcelona, Santiago de Compostela and Cordoba; however, I’d leave out cities like Madrid.  Furthermore, I’d include countries like Morocco or Turkey (highly-tolerant Muslim cultures) and leave out Saudi Arabia.

Out of 200 countries, there are certainly some worthwhile experiences.  But this doesn’t mean a person has to see it all and there are certain things one can leave out of the good old ‘Bucket list’.  If anybody is lucky enough, a frequent traveller will be able to enjoy at least 50 nations. “Oh so little time!  Where to go?  What to enjoy?” Here’s some advice to make your decision easier.

Where to start, where to begin?  Always begin with your own.  Before you try to know the land of others, know your own country first.

These are the best of the best.  Countries noted for beautiful people, scenery, foods, literature or simply the classiest places inside a continent or on earth.

Best of the best from an opinionated perspective

Best wines are certainly in France, but there are others nations which excel in this drink of the god Bacchus.  These are some of the places [other than France] worth visiting to taste their wines: South Africa, Chile, Australia, Argentina, Spain, Italy and Napa Valley (U.S.A.).

The tastiest chocolate societies are principally around Europe [few are otherwise outside], starting with Belgium as the top best (I know Agatha Christie’s ‘Hercule Poirot’ couldn’t be wrong!).  From there, it goes to: the Swiss, Germans, Austrians, French, Spaniards and Mexicans.

For beer lovers, it’s easy to start with Germany.  Oh god, how I love their beers!  But my second favorite is Belgium, then third comes natural for me, with the Netherlands.  Fourth are the Irish with a Guinness and keep in mind, “A Guinness is good for you!” Then there is the underrated country of the Czech Republic; a country for great beers–but few know about these tasty lagers and ales. After the five greatest countries for beer, sorry, as for the rest of the nations their beers are either good or less than good.  There’s no in-between.

Greatest country for banking, watches and languages, there is uniquely and only Switzerland.  Recommended not only for the former, but it holds true in great food and scenery.  Check it out and you’ll see what’s to live!

My country of the U.S. is another fantastic place to enjoy for its scenery. Whether it’s enjoyed via train or car, America has spectacular sites–one which comes to mind is the Grand Canyon on the Nevada State side.

Africa has always been the Garden of Eden. If this is true, then places such as: South Africa and Kenya hold the top slots for the most gorgeous natural reserves in the world.  Other than Mount Kilimanjaro which borders between Kenya and Tanzania, these areas are pristine with nature.  It has been stated over and over, “Africa is to nature, what Europe is to cathedrals.”

The great reads are in countries like the U.K. and Russia.  From Harry Potter to War & Peace, there are some amazing stories spanning for centuries in the fiction and non-fiction genres.  These two countries are to be enjoyed in reading, literature and travel.

Country with the sexiest women has been noted along Eastern Europe.  But one country reins supreme, it is Ukraine for all those interested in this beautiful culture.

Nation of handsome men.  For the ladies, I have been told Australia, others have told me Italy or Greece for their dotting on women, then it has come down by majority.  Turkey is up there with the most attractive gentlemen in the world.

Other than Iraq or Iran, the countries with the oldest cultures are Egypt with 7,000 years and China with a 5,000-year history.

The friendliest countries on earth in spite of their social problems are Mexico and China. Added to these can be the scenery and food. To find these two is to find people [as in most cases] who will give their best without asking for anything in return.  Sometimes we must ignore certain biased-media reports and experiment a place for ourselves.

Amazing dance and rice cultures are the following.  Spain with flamenco dancing and paella; Dominican Republic with a merengue and mangu (a delicious plantain dish with olive oil, garlic, a little salt and onions) favorites; Cuba with a tasty ‘surf & turf’ and Puerto Rico with the gastronomic rice and beans (arroz con habichuelas)–even better yet, both cultures have the best salsa dancers for over 100 years and counting.  It doesn’t end, the further south of the American hemisphere one goes, there is Cartagena, Colombia with the delicious vibes of Cumbia.  Into Buenos Aires, Argentina there is the lustful-enjoyment of Carlos Gardel’s tango, a roast (asada) and with Rio de Janeiro, Brazil there is February’s carnival in a mixture of samba rhythms and the palate can enjoy with gusto the best BBQ.  Just a quick detail, all of the above are great coffee cultures.

Glorious beef cultures are in the U.K., U.S., Australia, Brazil, Argentina and Uruguay.  Taking here the best selections of grade ‘A’ beef to savor.

Now, the most exposed martial arts come from Japan.  Even the styles of Jujitsu have gone the world over, but have mostly penetrated into the American and Brazilian societies.

Lovely cultures with their blends of gorgeous teas are: India, China and the U.K.

Countries with the highest quality of life, R&D (Research and Development), to study, work and be an immigrant in a tolerant society are: Canada, the Netherlands, Denmark, Singapore, Australia, New Zealand, Norway, Ireland, Finland and Sweden. By the way, this is including great health-care services for the young and elderly.

These nations are always on top with education.  Therefore, year after year, millions of people try to get into their schools; especially those who want to attend university.

This is the order mentioned: the United States, the United Kingdom, Australia, New Zealand, Canada, Germany, the Netherlands, Switzerland and France.

Nations with the most multicultural societies are: the U.S., the U.K., Australia, Brazil, New Zealand, Canada, South Africa, France, Germany, Italy, Spain, Argentina and Chile. These aren’t only a plural system of people, but also one which is polyglot with more than three-spoken languages amongst immigrants in the country, etc.

Country with the highest quantity of foreign teachers working in all four corners of its land is China.  There is approximately 600+thousand foreigner workers in China and bringing their respective cultures into this land. Furthermore, China is the highest country with 200-million Chinese nationals who speak English.  China is the second country in the world, behind the United States, with the most English speakers.

Personal best or countries that when visiting these areas will simply take your breath away.  For one, the crystal-clear waters and white-sandy beaches of Boracay Island, Philippines.  Followed by my years in the Caribbean with beaches on Culebra (Snake) Island, Puerto Rico.  Or other tropical havens like Juan Dolio, Dominican Republic; which inspired me to kayak and go scuba-diving.  My other sub-tropical favorite were the beaches of Havana, Cuba.  One unforgettable place was the coastline (western side of the island) of Bonaire, better known as, ‘Diver’s Paradise’, N.V.A. Want to walk into a dreamland?  There isn’t only Munich [for October fest], but there is the Region of Bavaria in Germany with its enchanting landscapes and castles. The Great Wall of China on the Badaling Side, Beijing is one magnificent piece of architectural marvel that serpents its way through 13,000 kilometers of land–up and down mountain tops. Mount Fuji, Japan is awe inspiring and takes your breath away when seeing it for the first time.  The Aurora Borealis (Northern Lights) was my personal favorite while visiting Keflavik, Iceland.  All of the above, gorgeous indeed!  Then comes the ‘City of Lights’, Paris, France with the Eiffel Tower.  Just wow, left me mesmerized! Another is my hometown of New York, but there is a memory which comes to mind: the Twin Towers (1973 – 2001), when these buildings existed–just draw dropping and meant to inspire.

Never seizes to amaze me what Mark Twain once said about travel.  What a great experience to open one’s heart-mind to something different in culture and what we are used to.  We are here to learn, obtain knowledge, wisdom and what better way to do it.