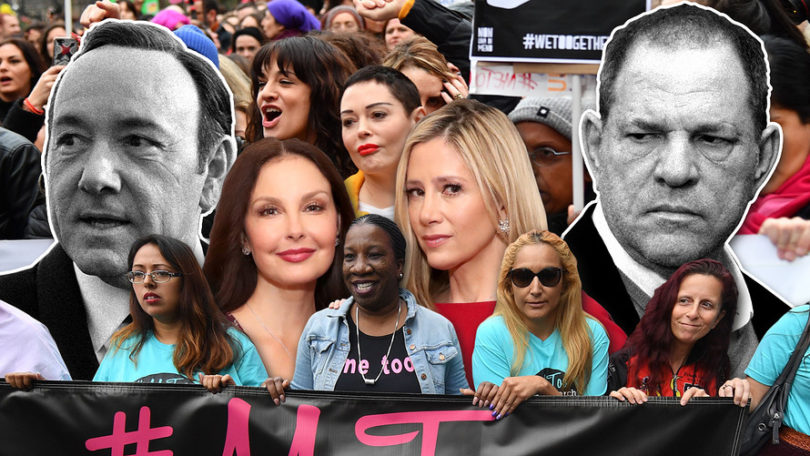 Hollywood: The Movie Industry which brought me way, way down

With the actresses coming out left and right, then to and fro with harassment claims; it’s hard to enjoy their movies or admire them as a bastion of examples anymore. Anybody who is a fan will eventually lose their taste for their personalities, flicks and tire of them.  The people whom once any person came to admire, will fall into the abyss of indifference and lack of interest.

This is what Hollywood taught me in the last two years since the #Me Too issue came to fruition.  It needed to happen with moguls like the disgraced producer, Harvey Weinstein or actors, Bill Cosby and Kevin Spacey. All three men had committed crimes for decades and needed to be stopped. But to what point the #Me Too movement has turned into a stage for a number of hypocritical actors using this idea to only take advantage and revive their careers.  This movement lost traction with the way many Hollywood actors behaved and continued to back-stab each other in the ‘court of public opinion’; without bringing-up any proof to the authorities in the matter.

Suddenly a number of actresses have an attack of consciousness and won’t cowardly name their perpetrators in the newspapers.  Attention seeking-grabbing fools who only come out when they want to promote a movie or sell a book.  Furthermore, their careers are in the toilet and in final-gutless desperation will say, “Me too!”

And I just have to add, “Oh, you too!” These actors place themselves in this situation when they decided that it was more important to take the fame and money. Moreover, it was less important to remove themselves from the problem.

Hollywood has turned into a laughing stock before the world.  An industry losing money, because they lie to the world and can’t seem to get it together. What a freak show, indeed!  The same industry that everybody sleeps with everybody to get ahead.  Every time a scandal breaks out, everybody feels ‘deeply sick, disturbed and disgusted’.  Oh, come on!  What a bunch of rubbish!  People who knew these things happened and never dared speak out!  For several of these actors as a matter of fact: Meryl Streep or Matt Damon.  I would say, “It’s a bit too late for that folks.”

A number of performers who didn’t have the bravery to come forward, file charges  with the police and take their cases to court.  Therefore, decided to stay silent. What lack of morals!  Those who didn’t speak-out, participated in the ‘couch casting calls’, accepted money and had benefited hypocritically through their careers.  Yes, the entertainers who made millions and spoke nothing of the matter.  The same types, such as: Uma Thurman (Oh, yes, the same who ‘bit the hand who fed her’, Quentin Tarantino’s that is), Gwyneth Paltrow (Showing herself all cozy with Weinstein in many promotional photographs for their pictures), Ashley Judd (Person who came from a powerful entertainment family and couldn’t defend herself before; you got to be kidding me, right?), Kate Beckinsale, Rose McGowan (A person noticeably of compulsive nature, going back and forth between claims of consenting sex or rape-she’s not sure, depending the day of the week-, accepting money and who is possibly an addict), Mira Sorvino (Another member of a powerful Hollywood family), Angelina Jolie (She is one of Hollywood’s elite, her father is Jon Voight), Asia Argento (Person who told a number of men while addressing an audience in Cannes that ‘time’s up’ and later comes out, that she abused a minor) and Oliva Munn (the same Ms. Munn who accuses literally everybody of sexual harassment to help advance her career and ends successful T.V. shows with her bad acting).  The above have made claims and I do believe in some of them; however, have they taken the person who victimized them to justice?  I see too little of this and too many anonymous claims, etc.

As I mentioned previously in my published article, ‘How “Me Too” Hollywood Types Destroyed Feminism’ (Otero, 2018).  These women as well as men have gone too far and at each others’ throats for too long.  We need to recuperate the dignity of the movement and not depend on Hollywood’s lack of values and without any moral compass to do it for us.  Because there are real victims out there whom are too afraid-scared to speak out.  Part of that has to do with Tinseltown making unsubstantiated claims and using a cause not for justice, but as a career-advancement opportunity.