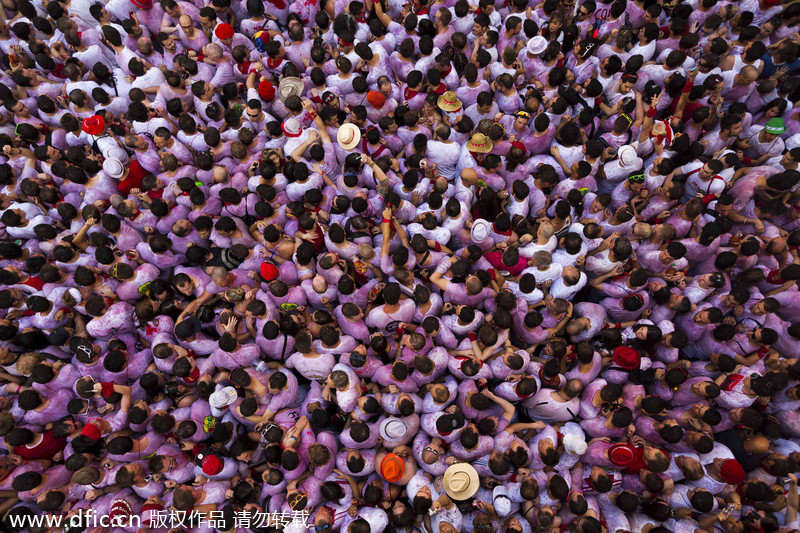 Typically, a human stampede is caused when you have a group fitting into an overcrowded area, trapped into a small space and can’t get out.  When seven people or more push onto each other, it produces 454 kilograms of crushing force to the anatomy–enough to cause suffocation or extreme life-threatening injuries to the body.  This happens because people are either: in terror, fear or just ignorantly go into a frenzy and try to battle their way out.  Often accidents happen, people are suffocated and trampled to death.

These tragedies are often associated to emergencies, concerts, festivals and religious observances not properly equipped to handle crowds.

This isn’t only a problem of the latter, but also overpopulated areas or countries without the proper infrastructure and education to help people understand the problems of human stampedes.  The worse stampedes up to this point have been documented in the last 14 years: Baghdad, Iraq (2005, 965 people killed), Mina Valley, Saudi Arabia (2006, 380 killed) and Phomh Pen, Cambodia (2010, 347 killed). Therefore, in the past these fatalities where much higher.  With more countries developing, the numbers have decreased.  However, in essence it is still a human problem and ought to be tackled not only be governments, but by people with an ethic conscious.

It is a problem quite often occurring in China.

You can’t fight the crowds; therefore, it is humanly impossible.  When trapped in a human stampede, just go with the flow and like the tide–wherever it takes you! Importantly is to not lose your balance and fall. Avoid getting pinned against each other, a fence or wall; unless you can climb and jump over the last two to release yourself from the crowd.  The basic thing anybody can do is to remain calm.  The more people panic, the more dangerous it gets.  If you have or are with a child, try your best to place the child on your shoulders.  Sadly, woman and children are the first fatalities in stampedes.  The trick to survive is to control your breathing and be in good health.  Don’t push!  Know your surroundings when you visit a place.  For example, know where your exits are located and learn to search for higher ground. I’ll explain more on this in just a moment.  Take time to know your whereabouts, it only takes the first-15 minutes of your time in knowing a new place.  Caution is key, even if nothing ever happens.  Other than exits, know places you can easily climb up if there is an stampede. Objects to achieve the higher ground [when outside] are the poles and trees. Also, the last piece of advice: it is called, common sense. Arrive at a place early and if you’re sixth sense is telling you that a place or area is too dangerous, then don’t hang around.  If a bus or train is too full, wait for the next one.  It’s not worth the risk of your life to be in useless rush ‘to get nowhere fast!’

People dangerously rushing into the metro system and buses without any thought of the consequences is an accident waiting to happen; unnecessarily asking for trouble. This happens even when laws are in place.  However, there needs to be the general rule of enforcement.  This is something which educators and the educational community have to face with: instructing the young generation to never rush into an oncoming bus or train.  Allow and teach people how to queue.  There has to be people at these spots: whether they are security guards or the local-traffic police to stop those from pushing and shoving.

With that said, what is left is to spread the word.