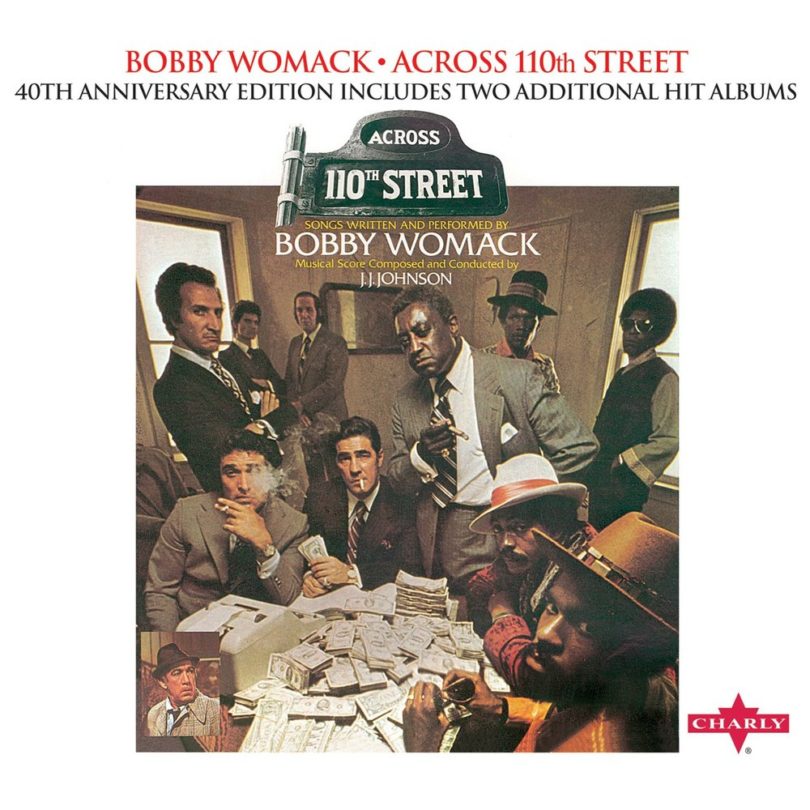 Painful as it may be, it’s good to remember where we all come from.  It keeps us real and humble to the circumstances.  When I sit and listen to Bobby Womack’s song, ‘Across 110th Street’, I’m with a flood of memories. Those which come rushing in cascades of pain, from the pushers on the street and pushing their narcotics.  Or the pimp dealing with a woman who was too weak to say, “No!”

The pain of those days is obvious for those whom grew-up in the violence of the streets.  Living in fear, running home, taking a beating and surrounded by a barrage of gunfire.  Most of us learned to carry a weapon (knife or otherwise) for protection at an extremely-young age.  This constant warfare that were the streets and defined us; that generation from Piri Thomas’ (Down These Mean Streets) or Nicky Cruz’s day (The Cross & The Switchblade).

The 110th Street Bobby Womack was referring to was that in Harlem.  Yes, the same Harlem that today has become culturally posh to be seen in the Apollo theater or pass along President Clinton’s law offices and [if you’re rich-well to do] live in one of its old brownstones.  While the new people, whether they are black or white–come in with ideas of gentrifying the place.  But Harlem is Harlem between 110th to 160th Streets, and with the greatness that holds true with its real-life characters like: the infamous Bumpy Johnson or the former U.S. Secretary of State, four-star General Colin Powell.  These streets helped shape what is today a better and safer New York. Part of that credit has to be given to Rudy Giuliani (former New York mayor who began the transformation of the city in the early 1980s), whether you agree with me or not.

I came from one of the five boroughs, a place that after 10 p.m. you didn’t want to get caught in or dared be seen.  This was my pride, little universe, remembrance and joy–it was the Brooklyn of my birth.  The same Brooklyn which saw me grow-up and I later left for something better.

Today, the streets are uniquely ‘Walt Disney-ish’, with a level of safety that I at least didn’t live through it.  Since all this gentrification was after my time. The New York City of my youth was between the 1970s to 1980s.  A place pulsating with culture and also, one with great violence, drugs and racism. Ruled by five-mafia families and you didn’t mess with these unwritten rules of the street or you created a ‘beef’/a problem for yourself.  My career would take me to far off places outside New York, but when I got back in the 1990s, New York and especially Brooklyn, could still be rough.  However, there was a softer-gentler side to the New York where I grew-up.

One which, I had to learn very quickly at the age of five never to walk around some parts of town.  Therefore, distinctively, I had to learn rather rapidly to use martial sciences to box or kick my way out of the streets.  If not, you were considered weak, a punk!

This was the same Brooklyn that I had my first-black girlfriend, this was when we were called by onlookers racist words like ‘Zebra babies’ and my bigoted father would later add, “Trying to improve race relations, eh?” Yes, these were the kinder, gentler words.  But we were called worse things.

These streets taught me to be tough, but it was New York who offered me to the world.  The same New York City that can still be rather rude.  But it’s never like the days when you got slapped in the face, took a beating or got killed for it!  Yep, Frank Sinatra’s New York, New York, “If I can make it there, I’ll make it anywhere…”

Therefore, when I’m telling a young colleague, “Hey man, you got to toughen-up!” Maybe, it is I who has to soften-up, because as I grew-up, I had to strive for something better.  Why would I want to go back to being that street kid from Brooklyn?  Never…  When certainly, things are getting better and maybe my generation needs to approach things from a different point of view; without ‘a chip on our shoulders’, which I have to admit–I still often have.  Getting better at it, although.  Therefore, there needs to be an approach to teach the young people survival skills for life, but from a delicate side.

‘Across 110th Street’ isn’t anymore, but that doesn’t mean we don’t deal with these issues back in contemporary New York, L.A., Boston, Oakland, Baltimore, Buffalo, Miami, Houston, Chicago or Ferguson for that matter. We still deal with our drug epidemics and racism, like back in the 1970s. What can we do to make things better?  Doing our best to improve our situation and that these past mistakes aren’t repeated all over again for the millennial generation coming up in the world.  Set the path, by being an example.  Isn’t that good enough?