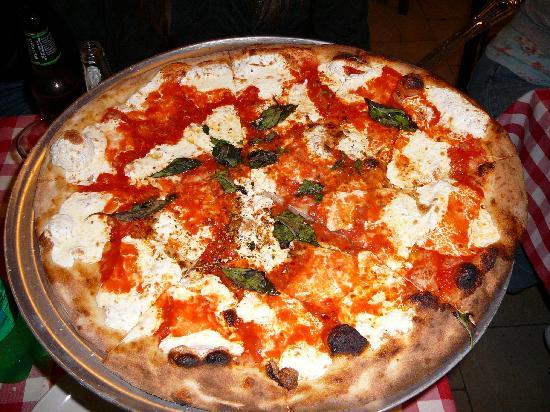 I was born in Brooklyn, New York and 1 Front Street, it was a always a treat to visit on the weekends.  Since there was my favorite pizza (比萨饼) joint, Grimaldi’s.  In spite (尽管) the long lines and waiting for a table between 25 to 45 minutes during lunch and dinner times, it was a special occasion. Because I knew once inside, I’d enjoy one of the best pizzas in the whole of New York City.

New York City has the reputation (声誉) of making one of the tastiest pizzas in the world.  Yes, outside of Italy, there are only two other places in the world which make great pizza.  One is my hometown of New York and the other is Chicago’s deep-dish pizza.  You can’t beat the taste (味道), it’s yummy and heartiness when your in the North and Northeastern parts of the United States.

As we all know, pizza was invented in Italy and it was a beautiful-culinary dish created almost two centuries before for Queen Victoria while visiting Naples.

Now, the influence of pizza has gone worldwide and hasn’t only extended through Europe and North America.  It has gone far and beyond of what most people would have dreamed of.  Pizza it is still enjoyed throughout Central and South America.  In countries such as: Brazil (with their concept of pizzaiolo) and Argentina with their influx of Italian immigrants (移民) after World War II created their own variations of delicious pizzas.

This hasn’t stopped this dish from growing into an international phenomenon (现象). It has gone to the far-off reaches of Africa (Ethiopia), and with the Italian immigrants going to Australia–it also made its tasty arrival there.  Arriving in places like Hawaii and the locals adding the elements of pineapple (菠萝).

It has come to China in the form of the franchise (专营), Pizza Hut. However, Pizza Hut was never to my fancy compared to the wonderful pizzas I have tasted in Nanjing, Jiangsu on Shanghai Road.  It doesn’t matter if its made by Italian, foreign or Chinese hands.  The secret is in the fresh-dough, thick-tomato sauce and cheese. Once the cooking time is right in the oven, it’s the perfect pizza to enjoy.

Where do I still get my favorite pizza from?

Well, it is still in New York and when I’m visiting my city, it’s a necessary pit stop (进站) at Grimaldi’s to have a pizza pie from heaven.

Come, and let your palate decide.