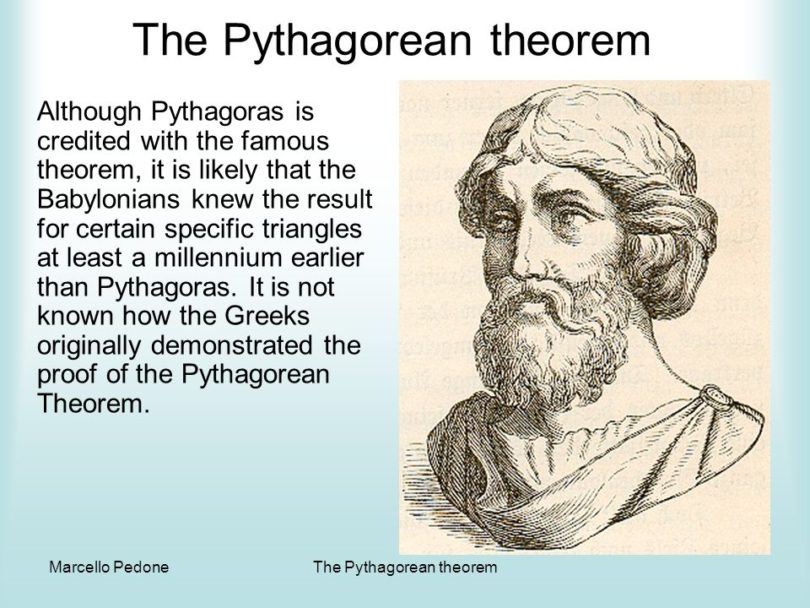 Math doesn’t only have to do with Pythagoras

Pythagoras was the founder as we know of modern day mathematics.  One of the principal-ancient Greek scholars.  He was to build a bridge into the future; because if it wasn’t for him, we wouldn’t have other scholarly art forms which define our contemporary world: e.g. engineering, math, physics, chemistry or commercial diving for that matter.  Just to take a few careers which make our world entirely better and different.  Furthermore, we wouldn’t have the perfection there is presently in the measurements and formulas of science, etc.

Our world is composed of numbers and sequences, and if any fool tells you to the contrary, think again.  The world wouldn’t be able to function without it.  From birth to death; society is filled with numbers.  Take the following: telling time, measurement of height, the palpitations of a heart, how fast a person/car/ship/plane can travel, establishing a timeline to history or how old a person is and building a bridge.  These are all forms which function by numbers.  The time a song can last, the calender and dates, etc.

Living in a complex world, this is simplified by numbers.  It doesn’t get any better than this.  That is why I love my favorite equation, E = mc2.  Can you guess who?  It was theorist and physicist, Albert Einstein.

To limit ourselves and say, we hate numbers is placing a limitation on our lives. Because, even if we love letters, math is also in the letters.  Therefore, we have to count how many letters are in the alphabet or how many vowels compose this structured-word system.

Not only in China, numbers were/are placed in high regard.  The rest of the global society dictate their lives by lucky and unlucky numbers; odd and even sequences. For example, the number ‘13’ in Western culture means something bad is about to happen; but if you take the numbers three, six and nine in Chinese society–these are a symbolism of great luck/wealth.

Nearly 1,400 years would pass after Pythagoras, until somebody called Leonardo Fibonacci (an Italian from Pisa) would bring the great art of mathematics up to speed and give it for all of Medieval Europe to enjoy.

Ancient cultures depended on mathematics, these same cultures achieved greatness thanks to their numbers and engineering skills.

Which society invented the perfect system for numbers?  There wasn’t any particular Empire or nation.  But here are a few which really made our world easier thanks to numbers, abacus, calculators, measurements and so forth: Babylonians were the first to influence greatly, as were the Egyptians in their building of the pyramids, then the Chinese (the Great Wall and abacus), after with the Indian Mughal, transcending further with the ancient Greeks, the Roman Empire (this Empire gave us the Roman numbers, numerical system and aqueducts which we still use today) and later it came with the Arabs.

Therefore, next time, you think that numbers are useless.  Come, take a look at the world and how numbers form the basis of it.  With that said, I’ll just ‘kickback’ (回扣) and listen to Culture Club’s ‘Colour by numbers’ and count the time with memories in my mind.