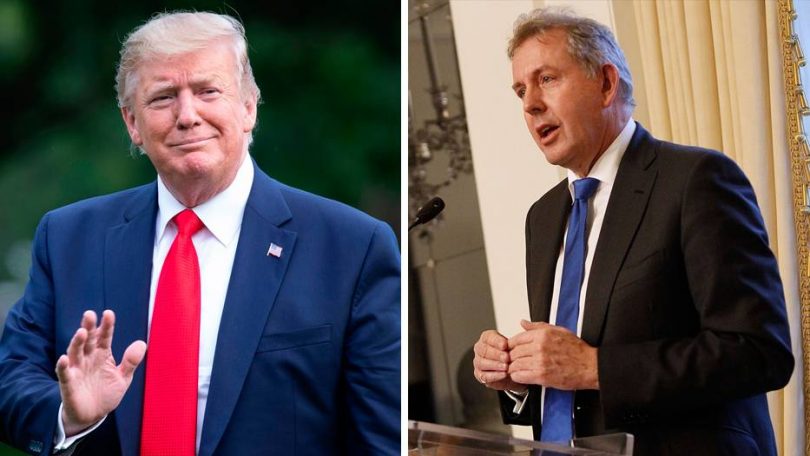 Whether it is his problems with former porno stars, putting his foot in his mouth with misogynist behavior, causing discord between countries or inciting hate… One thing is for sure, after President Andrew Jackson, President Donald Trump will go down in history as the most racist. He has made comments about a woman’s vagina on tape during his 2016 bid for the Presidency and still stupidly-enough, the American people elected him. He has made fun of an incapacited journalist. President Trump has been called childish; however, it is what the British ambassador said about his governing style a couple of weeks ago that perfectly ‘hit the nail on the head’.

But one thing is a constant with President Trump and as Tom Brokaw said in an interview, “He believes and knows, he is ‘The Greatest Salesman in the World’.”

Born rich and entitled, you might hate or love Trump, but he is a man that knows how to win with flair and nobody can’t deny: his megalomania has gone too far!

And not to fall in with the wacko-conspiracy theorists, as he once stated, “I can shoot somebody in the middle of Times Square and still win the Presidency!”

Therefore, that he has done and gone over the top with his shenanigans.

What Mister Trump loves for Tweeting, he has certainly lacked on having a ‘thick skin’, and being a man to start conflicts and not being one to necessarily stop antagonism.

What can be summed-up about the positives in the Trump Presidency and his policies? His achievement and dealings with North Korea in a peaceful matter once again. The temporary increment of jobs for the U.S. economy and where he has incremented jobs, he has also destroyed the welfare of the farmers of America with the trade war with China.

Yes, our President is the biggest loudmouth in history and what should have been a solution at the border with Mexico, has turned into an international-inhumane fiasco of gargantuan proportions. A crisis…

A man who loves to start fires instead of putting the flames out. What I would love from Mister Trump is more action in the solution of our issues internationally, domestically and less talk. That is why, the British ambassador wasn’t entirely incorrect.

The British Diplomat isn’t exactly incorrect, but there are bigger issues to face

Whether you are a Republican, Democrat or Independent–one most grow a thick skin when dealing with political and international affairs.  To become impervious to criticism and move on from the pettiness.  This is all but fair.

The issue of the British Ambassador calling President Trump ‘insecure’, ‘incompetent’ or ‘inept’ shouldn’t be the issue when we live inside a system in which freedom of expression is more than acceptable.  It shouldn’t matter where or whom it came from.  The point here is, what is the President doing to solve the problems arising inside the country and internationally dividing itself.

The problem is the following, the lack of objectivity.  Does the British Ambassador, Kim Darroch deserve an answer from our President?  I think not.  Inside politics, things become more often than not an arena for hypocrisy or backstabbing.  Then, all of a sudden, there is sudden turn around and they talk gloriously after badly trashing each other.  The President shouldn’t concern himself towards what critics say or mean. Actually, the matter for any President or candidate for the presidency is to satisfy the people.  Something which hasn’t happened since 2016.  From the climate change to the issues of poverty in our country and health-care.

Americans have to stop lying to themselves and get out of their own ‘bubble’ or ignorant stupidity.  Therefore, we as a people need to research and read more, stick to the facts and stop with conspiracy theories or paranoia.  Furthermore, get off our lazy behinds, defend our democracy by peacefully protesting and going out to vote.

If a world leader is more than secure that his leadership can stand the test of time, then why give an answer to any criticism?

What affects Trump most times is his desire to answer all the critics.  His impulsive mouth is usually placing him on the hot seat.  My desire is to see a lot more problems solved and less communication on Tweeter.

To sum up the problem, the diplomat from Britain was wrong to do it; however, please allow people to say their say and get on with life.

Give people the chance to criticize and then, move on.  There are bigger issues to solve right now with: the poor, health-care, creating more opportunities to own a home, lower cost for all to study in universities, become better educated, we need to come together and stop driving wedges with allies on an international basis.  Leave the critics to the critics, and get on with life.

The world right now is round and we need to understand the issues of globalization.  These global manners have to deal with Americans cooperating with one another and internationally.