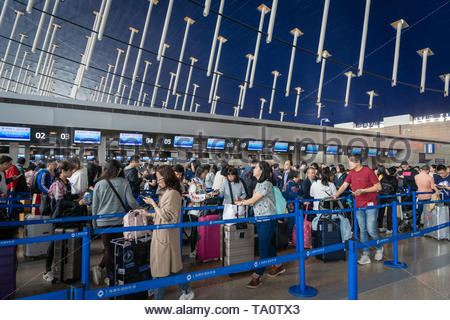 Did I ever tell you that China is a fantastic place to travel?  However, any person living here must understand the following; connecting flights in China are still a disaster; especially between cities.

In China, any person can tell you there are the most modern in the world; which in essence it is true.  But sometimes these terminals lack the infrastructure to receive so many passengers on a daily basis.  These are woes of a developing economy. Some passenger terminals feel like an overcrowded bus or train station, with this grungy feeling in tow.  Instead of having a monorail for the different terminals, passengers once they are off the plane have to be bused from one section of the airport to another.  Complicating problems with delays and so forth.

China doesn’t have a problem with international flights when these are scheduled for departure.  Actually, the schedule is rather punctual.  The problems and stress commences once touching down in Mainland China. There is an organized confusion, messy and tardiness which irritates even the most seasoned traveller. The issue is locally, when one makes travel plans and has to be delayed in airports [on average] 30 minutes or more.

I mean, one thing Chinese have is a big heart. They are extremely friendly and helpful; even when they can’t help you, they’ll do their best to solve your issue.  They do have the patience sometimes some of us westerners don’t have and certainly need to acquire.

At the same time, there isn’t any wiggle room or space to travel at ease, without pressure. A person is usually on the run to get from one gate to another.

In the case of Pudong International Airport in Shanghai, like most other airports has a transfer section and on the ground crew directing the way. But in the majority of cases, the customer is running to the next gate and arriving for boarding with less than a couple of minutes to spare or literally photo-finished!  They do it well to not miss the flight, but it’s totally unnecessary.  When the planning can be better.

When I interviewed Erin Deng, a lovely Chinese passenger from Changsha, Hunan.  She was telling me her experience, as she presently studies in the States (Pittsburgh, Pennsylvania, U.S.) and comes home for her summer holiday.

Q: How would you compare the airports between the U.S. and China?

A: I think in China the structures are far newer-better, there is modernism.  In the U.S. there is more facilities and human treatment of the disabled to get around.

Q: I have to agree.  How was your impression with JFK (New York), personally I don’t like it compared to Newark International?

A: I didn’t like it, because it’s too small and not prepared for the international traveller.

Q: Well, it does ring true.  Keep in mind, JFK was built in the 1960s.  What’s your experience with connections in China?

A: We are too many, it’s always crowded.  The stress is much higher.  I haven’t dealt with three to four hour delays; which is the case with other people.  We need better connecting times to be at ease.

Q: How would you fix the current issues with these airports?

A: Build a trail way into the terminals.  This would make it easier and less frustrating.  But my father believes these issues are getting better in China, compared to before.  With easier on-time connections between cities in China and less delays.

I thanked Erin for her time and thought, what could be done to make travel easier? As I explained, every country has its positives and negatives.  It’s all a matter of being objective.  One thing I have learned, everything has to be given a chance to comprehend what’s great and what’s not!

When I arrived, after 27-hours travelling.  Although I had felt the frustration after passing through Pudong (Shanghai) on my way to Hunan Province, I was greeted with an amazing welcome.  The following day, while eating a delicious Sichuan hotpot lunch, I got the best service and treatment with extra fruit for dessert and in Chinese a beautiful-red heart which said, “Welcome to Changsha!”

I thought, keep an open heart, because when you least expect it, life can’t any better than this!