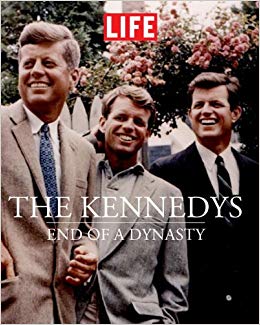 ‘The Kennedy curse’ isn’t so much a curse, but the lifestyle they have led

Deuteronomy 5:9/Exodus 20:5-6: You shall not bow down to them or worship them; for I, the LORD your God, am a jealous God, punishing the children for the sin of the parents to the third and fourth generation of those who hate me, but showing love to a thousand generations of those who love me and keep my commandments.

If it was for the above statement, all our families would be paying for such infractions into eternity.  Whether you believe in the Torah or Bible, these words don’t often have to ring true, and this article has nothing to do with religion, but what leads families into a path of continuous destruction.  Again, this has nothing to do with religious or karma (what we do, whether it’s good or bad will comeback to benefit or hurt us in the long run) beliefs.

There is the course of infractions-mistakes we do as human beings ourselves, and our families have to pay for these errors in judgment.  This will take place for generations to come.  It happens not only to families, but countries across the globe.  Have you all heard, ‘the sins of the father will reflect on the actions of the son!’ Yes, but this in essence isn’t necessarily true.  Why should the son pay for the sins of the father?  Because what the father did is a reflection on his family, even when his family doesn’t dirty their hands into illegitimate businesses.

This is what has happened to families like the Rockefeller, who started their fortunes by exploiting others and drug-dealing opium in China.  Money changes everything and it also shows that it cannot cure the tragedies that will beseech these famous dynasties.   It also shows that money is a means to an end in opportunities, but it does not mean people in these socialite circles will not often indulge into womanizing, depression, drinking and drug problems.  It gets bad, because usually these families begin their fortunes as exploiters and then as helpers.  In other words, from criminals, to politicians and ‘wanna be’ legitimate business professionals.  As with the case of the Kennedys.

Take the example of the Kennedy’s, how those like its patriarch, Joseph began his fortune by bootlegging.  Profiteering from gambling and exploitation of women through prostitution in the 1920s and 1930s. Although, a generation later the family had cleaned their money up.  This didn’t mean they wouldn’t face tragedy. Starting with Joseph, Jr. who died in an airplane explosion during World War II or his two other sons were victims of assassination (Jack and Robert).  This continued, as Ted himself struggled with his own woes when he allowed a young lady to drown and didn’t return to rescue her underwater, while trapped inside a car (Chappaquiddick incident).  Jack’s son, John Junior (John-John) would die in a plane crash more than three decades later.  The latest victim was Robert Kennedy’s granddaughter, Saoirse Kennedy Hill and this continues with the so called, ‘curse’.  With that said, it isn’t about curse or karma.  It’s about lifestyle and what we do in life which will later define our rights and wrongs through life.

Why will the second, third and fourth generations of these families implode?  The answer is simple, lack of work ethic.  What their ancestors suffered to build their business fortunes, this generation has it relatively easy.  The remnants of the Kennedys today have had a privileged life, sometimes they haven’t gone without, except for one big thing: love.  This is the part which these families have been missing and do struggle without. For all their money, there isn’t a solid fountain in love and care.  There are too few exceptions to the rule, when I see this generation of rich kids spoilt-rotten and screwed-up since childbirth.  Why would a family have a child to be raised by a nanny and not the parents themselves?  Here is where the problems begin.  That is why, for all their entitlement, they can be called, “Poor little-rich kids!” A tragedy in the making, sadly.  R.I.P.!