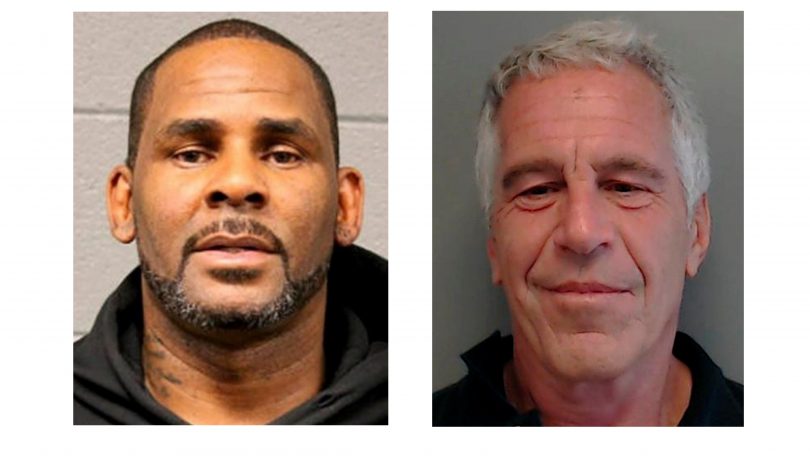 Frat boy immunity has to stop

When news broke out that R. Kelly and those like Acosta or Epstein were accused of sex crimes. Most must have thought, ‘It’s about time!’

These types whom are charged with rapes, enslaving minors and into child pornography.

The world hasn’t changed much when it comes to rich men getting away with crimes.  The problem often seen is the affluent getting away with it and it doesn’t matter if their black or white.  These are the privileged frat boys taught because of their money and status can do whatever they want.  It is the typical attitude of the so called educated-rich, who think that dating belongs in the category of knocking down a female and raping her. Misogynist men without any respect for women and if they aren’t stopped will continue to hurt all the women in their lives.

Now, I can sit here and judge all day long.  I can point the finger in anger and say, how horrible and will use words like disgusting.  However, did you know, it is their fault, but not totally.

I blame those in government or money making corporations.  The powerful and elite whom protected these people while they continued to commit their crimes.  My feelings, those in charge should also face charges for protecting the crimes of those committing pedophilia.

Take the example, R. Kelly was protected for years by his family, friends and the music industry/moguls.

Yes, the types of fraternity boys like Acosta with their smug-unapologetic attitude.  The Labor Secretary has demonstrated an arrogance and manner which expresses, “I don’t care!” He doesn’t have to say, but has certainly shown it.

Human beings will constantly break the law when they know it’s easy to get away with it.  The case and point, Epstein was protected constantly throughout his entire life.

The problem with protecting this frat-boy culture, the system emboldens these men to do whatever they want while destroying dozens of lives.

I believe in due process and not jumping to conclusions without a proper trial.  It’s part of our justice system, whether I agree with it or not.

The breaking of the law started for these men while they were young.  I have been hearing of R. Kelly’s behavior for the past quarter-of-a-century.  But while he was making money for the music industry, nobody had the guts to stop him.

Epstein, like Acosta belong to a culture of men with money.  This behavior started possibly in College–while in their fraternities.  Yes, the same fraternities which sometimes drug and rape young women.  Where is the sense of justice in all this?

The problem continues when we treat the victims like the perpetrators.  There’s no respect! Attitudes in our culture have to change.

Now, these same men move on to younger and younger females.  When they do this, then the matter gets worse when older men are having sex with children.  This abominable act only grows in males as they become older.  Beyond charging a sex offender or somebody accused of pedophilia; the system has to start charging the people who protect these men and their horrific acts.

But while money is involved, ethics will easily go out of the window and be substituted by hypocrisy.  Destroying permanently the lives of the innocent.

Society will never stop these problems, but people can sure curve the issues. When the privileged males are taught to respect women since they are young.

Stop the walls of protection, silence and convict not only the sex offender, but those who protect them.  Then, things will slowly but surely get better.