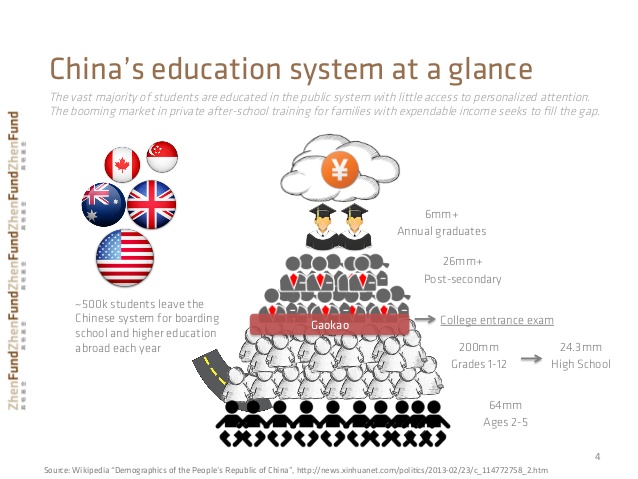 As my words are repetitive, like ‘beating on a dead horse’, there is a moment to talk about the educational system in China.  For this time, it doesn’t only deal with students’ 18-hour-days or that Chinese students are the brightest.  It deals with an educational system that force feeds the students for 12 years, through a period from primary to high school; only to turn around and send the students abroad to correct the mistakes from a compulsory bad-educational system.

There is a lot positives to the Chinese system in the Mainland.  Students learn to deal with long days, stress and not only learn Chinese; but to give constant continuance to English, Sciences and Mathematics.

The problem that stands clear is the following: what is forced cannot be undone overnight.  What destroys most kids once they travel to freedom based-educational countries, such as: the U.S., U.K., Canada, Australia and New Zealand can really distort their minds.  The student is too childish/immature to handle it.

What often occurs before is this, by the time the students reach middle school, most classes are conducted in Chinese.  And yes, it ought to be this way when staying in China; however, if the plan is to send them abroad–their education is warped when they are only taught in Chinese and very little English is incorporated.  This is the constant in trying to prepare a student for the following five years.  One in which he or she won’t be able to cope with the pressures of later life and University.

When confronting educational leaders on why this cannot be changed, the educator whether they are Chinese or Foreign are viewed as ‘challenging’.  The teacher is only trying to ask the tough questions which nobody wants to answer.  By the end of the semester year, such teacher is either passed over, ignored, fired or the contract isn’t extended.  This teacher is usually treated like a ‘troublemaker’, when only this educator wants to be an element of positive change.

This is the vicious cycle hurting an educational system that yes, the student is great at math and science skills; however, there isn’t any survival skills when dealing with life and study outside of their environment.  This truth doesn’t happen only abroad, but it includes Mainland Chinese not coping with the educational system in Hong Kong.

A student 80 percent of the time is either failing or taking too long in complete a grade or degree outside of China, etc.  Another issue which affects a lot of Chinese students isn’t only failure, but there is often the consequences of those cheating through plagiarism and getting caught. This fact hasn’t only happened in countries like the U.S., but also Australia.  Those who achieve a degree of the 80 percent mentioned will take at least six to eight years in completing their goal. One reason for this, is that most students will need at least two years to learn English first in foreign lands outside of China.  The other four to six years is to focus on the major.

Educators who try to introduce radical views on how to educate the students better are often dismissed as ‘dangerous’ for their ideas and let go by a system which only wants to do things the Chinese or old-fashioned way for students whom are going abroad.  Now, if you read carefully the last sentence will realize how ridiculous the latter statement sounds.  Chinese education in a foreign environment.  Catch my meaning!

When students ought to be taught not only English, but culture from foreign lands, there is often a wall of denial and resistance; this is especially true from leaders and ‘big wigs’ who either are too stubborn to admit they are wrong or haven’t had any experience outside of China.

This doesn’t only upset innovative educators, but those students whom are clever enough to know better.

How to change a broken system of children whom have to be pushed and those whom without being pushed cannot perform?

First, Chinese already have a great recipe for a wonderful educational system.  All they need to do is to change it by the next generation.  Reduce the day times from 18 to 10-hour-days.  That’s for starters!

Next step is to allow leaders with more innovative experience to do their jobs, and not those whom are presently in charge who will only keep Chinese education stagnant.

The last part, China already has quality Universities, such as: Tsinghua, Peking and Nanjing Universities.  Start honing more on these and allow students to incorporate their own international curriculum; but without losing the Chinese elements.  Take examples like Hong Kong.  It has the former British style, incorporating the Cantonese and Mandarin languages.  The latter can’t get any greater than this; it is all a matter in seeing everything in a positive light. Therefore, viewing what Chinese have, instead of focusing on what they don’t.  However, it’s a matter of the leaders having enough vision to liberalize education, allow new blood to come in and change it.  This is to change already something which is destructive to the young-Chinese psyche.  Factors don’t lie when it comes to loss of vision, depression and thoughts of suicide because of excessive homework that sometimes when it is over five hours a night.  If this doesn’t change will only psychologically destroy the student.

What will it be, change or stagnation?  It is up to the Chinese to lead the future; therefore, there must be ways to better education, not be obtuse, fraid or ignorant about it.