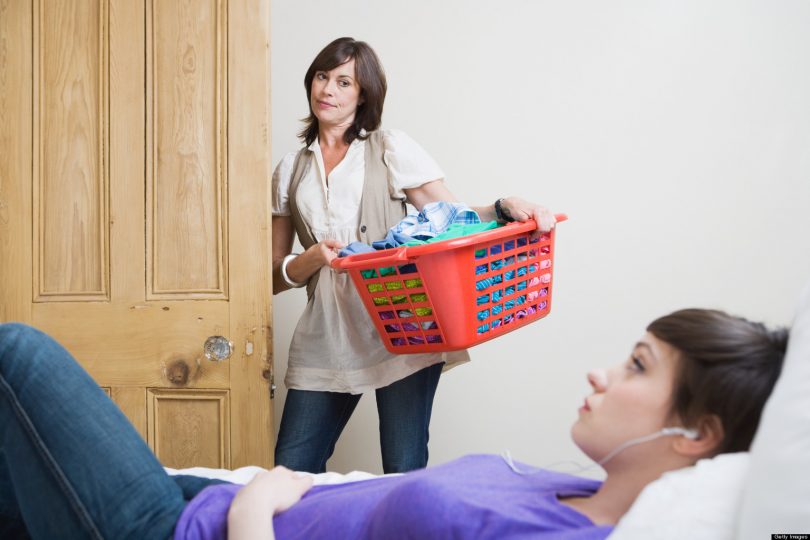 This expression although somewhat crude deals realistically with children who grow-up, but never mature to let go of their parent’s apron strings. This co-dependency into adulthood has cost conflicts between families and bitter disputes.  Even the ones which have headed into the courts-of-law. When you have a 30-something adult whom is useless to his/her parents and will not go into the world.

There’s something instinctive in most human beings.  It is natural to go into adulthood and want independence.  It doesn’t matter how close or distant a person is from their family.  Families nurture, but have to learn to let go. The nature of the game is to grow, finish studying, find a job and develop a career.  Later, that person will live or rent their own place and start a relationship–if he/she wishes it. The relationship will possibly go into marriage and in the future have a baby.

What’s presently happening with the millennial children goes this way… They grow-up, but emotionally do not go out on their own.  Lacking in social skills to deal with the world ahead of them.  Creating a disaster of a human being, a failure, a loser.  Possibly this was created by parents whom over spoilt their children and never gave their offspring the tools to survive in this unfair and cruel world.  Stupidity will arise and you’ll have a person still living at home into their 30s and being an economic burden on the family.  This individual is probably a bachelor/bachelorette without any desire to do things for themselves and even less marry.  Why should they leave the house?  If mommy and daddy can do everything for them!

This phenomena started in the United States through the 1990s.  And it became an issue for parents whom were getting older and wanted to retire. The people in their golden years wanted to relax, but couldn’t, since they still ‘carried’ dependently their adult children at home.  In most cases and surprisingly, this co-dependency has spread towards the male population and not so much towards the females.

With China’s rapid rise in the last two decades, the problem has been spreading to this side of the world.  Adults without any realistic notions of what is to struggle or live in the world; while they live in their parents’ shoebox home or basement.

The world can be a scary place.  This is often true.  It is safer to stay with our parents than face these fears.  I can completely understand that!  But there is a point, whether we like it our not, that we have to leave the house and ‘conquer/survive’ the world for ourselves.  Face life the natural way…

The issue with these literal ‘Vagabond children’ is that, they are lazy bums-begging and living at home without any dignity or pride for themselves.

I’d be embarrassed if I was still in my 30s, literally ‘sucking on mom’s tit’! Excuse my crass comment.

I can blame parents for this phenomena growing in society, but I have also give fault to industrialized countries and how they are not teaching youngsters about the hardships of everyday day life in the school systems. Therefore, you have a generation of escapist who live in ‘fantasy land’.

This issue has captured national headlines: like the problems with too much homework, obesity and co-dependency on technology.  Soon this will be something occurring more and more.  Either we stop this generation or let it spiral out of control!  The choice is up to us, the middle-aged and elderly parents allowing it to happen.

Dedicated to a wonderful and great teacher, Oscar Ma. A young man whom should give himself more credit.